Churches in South America are buzzing with priests who were transferred there from places like U.S. and U.K. But many of these priests have a dark, unknown past.

A lot has changed in U.S. and U.K. in the past several decades. As society distances itself from the hold of religious institutions, the power of clerical authorities has waned in the developed countries. This has weaved new patterns on our social fabric, but one undeniably positive thing to come out of this change was that priests and religious figures are no longer immune to the law of the land.

After exhaustive investigations revealed that priests often targeted vulnerable children in the church, authorities started to take action and more priests were made to pay for the crimes. This policy means that churches no longer welcome priests accused of molestation. 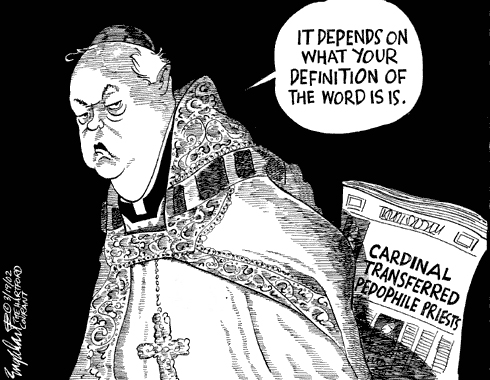 So where do these priests go?

The Catholic Church, if it cannot protect its priests in developed countries, conveniently sends them to places where they will not have to face the consequences of their actions.

A recent report by GlobalPost sheds light on this chilling new trend of the Catholic Church sending accused priests to places like Peru and Brazil.

One such priest is the Rev. Jan Van Dael, 76, a Belgian living in Caucaia, Brazil, who is being investigated by the Brazilian and Belgian authorities on a plethora of child abuse allegations.

But in the northeastern Brazilian city where he lives, Van Dael enjoys a fairly relaxed life. There are no authorities ousting him from his position and taking him into custody, no TV channel hogging him all day.

Van Dael, under his charity, distributes soup to locals and is allowed to be in dangerous proximity to children. During the interview with GlobalPost, he reached out to touch a child’s hair, affectionately saying that he reminds him of a boy he had in his house in Rio de Janeiro. Van Dael’s room is lined with photos of children.

These are all the perks of the retirement plan offered by the Catholic Church to priests accused of rape and abuse. Spend a lifetime preying on children, before the church sends you off to a place where no one questions your morals.

The horrific thing is, the Catholic Church uses this as a tried and true method. This is how many abusive priests escaped prosecution or even public accusations in the U.S. At the first signs of suspected abuse, church authorities would simply transfer the priest in question. These constant transfers allowed many priests to go on a reign of molestation against the very children they were supposed to shepherd.

The Rev. Paul Madden, an admitted child molester and rapist, is another priest benefiting from a new assignment.

In the 1970s, he “repeatedly raped and molested” a 13-year-old boy with whom he took a trip to Ireland. Madden shies away from saying he abused the boy, saying “something” happened because he drank for the first time. Although he is full of “guilt and remorse,” Madden is adamant that God has forgiven him.

These days, he seems to have put the past behind him as he works for the church in Peru. He came to the country in 2003, soon after the victim’s second lawsuit was dismissed because too much time had passed.

Recently, a priest accused of raping a 14-year-old altar boy and church choir member for over a year was reinstated in India.

The Rev. Joseph Jeyapaul, who pleaded guilty to the sexual assault, was jailed for a year. He was, however, released early due to the time spent awaiting trial.

The church fully realizes that in places like India and Peru, laws regarding sexual abuse are weak, and unlikely to be implemented.

The church still yields considerable power in South America. The dynamic between clergy and followers is different, and a priest is considered infallible. It is much easier for the accused to live comfortably, and with impunity, in these places.

These are not isolated cases. These are not even all the instances in which some gruesome horror has been witnessed.

If the Catholic Church investigates all complaints of sexual abuse it receives without any external influence, and keeps the identity of the culprits confidential, it is children who will continue to pay the ultimate price, long after a pedophile priest has left for a new assignment.