Clergy, parishioners, public officials and other LGBT rights advocates held a rally in Hoboken Wednesday night in support of a gay priest stripped of his religious authority and his job at two Hudson churches after speaking out in favor of a Catholic school faculty member fired for being in a same-sex marriage.

The early evening rally at Stevens Park on Hudson Street was attended by about 3 dozen supporters of the Rev. Warren Hall, who was removed last month from his dual position as parochial vicar at both Saints Peter and Paul Church in Hoboken and St. Lawrence Roman Catholic Church in Weehawken.

Hall was removed by 75-year-old Archbishop John J. Myers, who is past retirement age and awaiting a replacement to be named by the Vatican.

“We the people have a god-given right to stand up for what we know is right,” said Michael Billy of Jersey City Pride, which organized the event in conjunction with its Hoboken affiliate. “This archbishop is vastly out of touch with what is going on in the world.”

Hall had been parochial vicar, a kind of assistant pastor, at the two churches since July 2015. He was assigned to the churches soon after being removed by Myers from a campus ministry job at Seton Hall University for what Hall said was his support of the LGBT community.

Last month, Myers suspended hall following his outspoken support for Paramus Catholic High School’s dean of guidance and basketball coach, Kate Drumgoole, who had been fired by school officials after they learned she was married to a woman, a union officially sanctioned by the state, but not the church.

Jim Goodness, a spokesman for the archdioceses, said Hall had been stripped of his position, “because he was disobedient,” though Goodness declined to say just what it was that Hall had disobeyed. Goodness said Hall is free to appeal his suspension to the Vatican.

But Hall said he had no immediate plans to do that, and supporters at the rally did not dwell on his old job. Rather they stressed the importance of spiritual leadership from outside of the church, which has often been the catalyst for change within it. 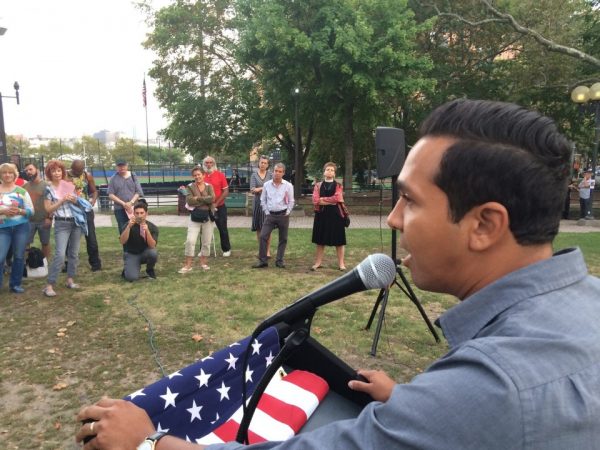 “Change is here, it can happen, it has happened, it will happen,” Laura Knittel of Hoboken Pride, told Hall’s supporters in impassioned remarks. “Let’s pray for the archbishop. Father Warren, you’re work has just begun in a whole new chapter of your life.”

Hall, a 53-year-old Jersey City native, was stripped not only of his post at the two churches, but also of his right to give mass, take confessions, perform pastoral services of any kind, or even identify himself as a Catholic priest. Myers had directed Hall to move out of the rectory at Saints Peter and Paul into a retirement home for clergy in New Jersey. Instead, Hall said he is living with family, contemplating his next move.

Hall said he was grateful to supporters who turned out for the rally. And in an interview as others sang, Hall also said that although he understood the hierarchical rationale for the disobedience charge, he insisted he had never spoken out against the church. In fact, he aded, he had always urged Catholics to remain within the church regardless of their sexuality.

“In a letter, a notice, that the archbishop sent out last year, he made clear that groups that have positions that are opposite of the Catholic church we should not be involved with,” Hall said.

“However,” he added, “my belief in that is that my involvement with those groups were for positive reasons. For instance, PFLAG, Parents and Friends of Lesbian and Gay Children, I went to those groups to talk about how God loves their children and that we should welcome their children. And so, I think I can see why I’m accused of being disobedient, but I don’t think it’s being disobedience because the message that I brought to those groups, in every case, was not anti-Catholic.” 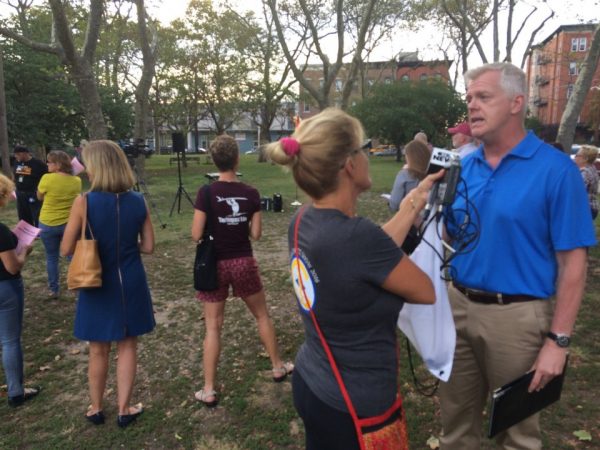 Hoboken Councilman Michael DeFusco, a parishioner of Saints Peter and Paul who is gay, read a poem by Mary Oliver, “Sunrise,” that he thought was a fitting tribute to Hall, whose outspokenness may have cost him his livelihood, but could contribute to a brighter future for others. The opening line of the poem reads:

“You can die for it —
an idea,
or the world. People
have done so,
brilliantly,
letting
their small bodies be bound to the stake,
creating
an unforgettable fury
of light.”

Then, in his own works, DeFusco added, “Thank you, Father Hall.”