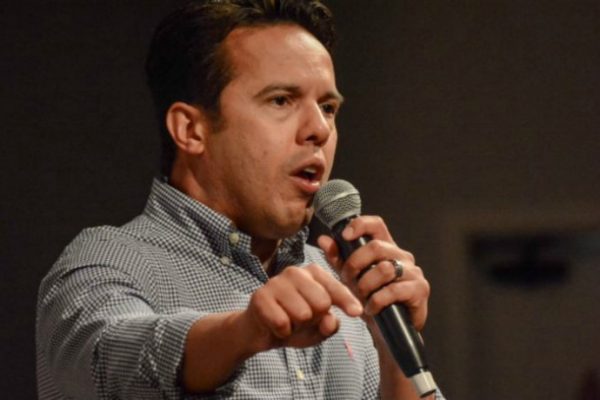 Let’s get the boring stuff out of the way first. From what I’ve seen, conservative religious responses to the election of Donald Trump have mostly been along the lines of, “Congratulations, praying for you, looking forward to outlawing abortion, also undoing marriage equality, and oh yeah, religious freedom is really important.” Archbishop Joseph Kurtz of Louisville, president of the U.S. Conference of Catholic Bishops, at least threw in a caution that Catholics weren’t down for anti-immigrant legislation: “We are firm in our resolve that our brothers and sisters who are migrants and refugees can be humanely welcomed without sacrificing our security.”

Perhaps the most interesting conservative reaction came from Samuel Rodriguez of the National Hispanic Christian Leadership Conference: “We must continue the fight to reconcile (the Rev.) Billy Graham’s message of righteousness with (the Rev.) Dr. Martin Luther King’s march for justice.” With Rodriguez, who the hell knows what that actually means, but it at least sounds like they’re not giving up on the fight for immigrant rights.

Mainline leaders were mostly subdued, at least the ones who did react. For example, leaders in episcopal systems, as is their wont, called mostly for prayer and reconciliation in the aftermath of the election. “Let us commit ourselves to the hard work of life together,” wrote Bishop Matthew Gunter of the Diocese of Fond du Lac. United Methodist Council of Bishops President Bruce Ough followed suit, calling on Americans “to put aside divisiveness and rancor and come together for the common good of this nation and the world.” Michigan Bishop Wendell N. Gibbs went so far as to caution protestors not to become divisive or violent.

Still, some bishops were not so keen, mildly. Andrew M.L. Dietsche, Episcopal Bishop of New York, reaffirmed what he called “basic principles of the Christian faith”: the equality and dignity of all people, welcoming the stranger, compassion and relief of the poor, and a commitment to non-violence. Newark Bishop Mark Beckwith gave perhaps the firmest Episcopal note of dissent, articulating a calling to be prophetic in the face of “Othering.”

Episcopalians and Methodist have a strong tradition of the via media and church unity in the midst of controversy. Congregational polities allow for opinions to be expressed more strongly, shall we say. Some of them let it rip. Cameron Trimble, leader of the United Church of Christ’s Center for Progressive Renewal, had this to say:

For the sake of the people we are, the people we love and the planet we live within, you must prepare yourself for leadership. You are now ordained a public theologian, a freedom fighter, a prophet, a disciple, a visionary, a love warrior. You are fierce, and you are wise. Most of all, you are undaunted by hate. You will not tolerate injustice.

The election is finally over. Most of us are shocked, even horrified, by the results. We live in a nation whose deep divisions have been exposed. The wounds of this election will not heal soon. Many of us are emotionally exhausted and deeply offended by what we have experienced.

This is a time to take a deep breath and a long view. Our role as religious progressives committed to democracy, compassion and human dignity is to help bend our culture toward justice. Think of issues like marriage equality and civil rights. The laws change when attitudes change. Our role is to help change attitudes, to lead by example.

Fear, anger, racism and xenophobia have created fertile ground for demagogues. Our voice is going to matter in the coming years. Our role, as always, will be to be a powerful voice for compassion and civil rights. Perhaps, at times, we may even be called upon to join with others to resist flagrant injustice.

President-Elect Trump should be forewarned that our faith will not allow us to permit him to fulfill his promise to criminalize immigrants by conducting mass deportations, or sit idly in the face of racial profiling of African-Americans, Latinos and religious minorities.

Perhaps I’m biased, because (full disclosure) it’s my denomination and I’ve known John Dorhauer, President and General Minister of the United Church of Christ, for a long time. But Dorhauer posted what I thought was perhaps the strongest response to Trump’s election so far:

Because this election sharply separated us over matters of race, gender, human sexuality, faith, economic inequality and political persuasions we all bear a heavy burden moving forward. It is our call, our shared mission, to heed the call of God’s Spirit and to work to repair damages in our deeply wounded and fiercely broken body.

Mr. Trump was able to win this election in spite of clear evidence from him of racism, homophobia, xenophobia, misogyny, and Islamaphobia. This was so blatant that many of his own party’s leaders could not endorse him. Many who voted for him knew this, and yet their fears about what is happening in their lives overrode their distaste for his bombast. In their search for a leader not connected to the power base of a government that has been perceived as corrupt, inefficient, and out of touch – his populist rhetoric appealed to them. He must now lead a country where people of color, women, Muslims, immigrants, the disabled, and an LGBT community all feel the sting and impact of his public speech.

Dorhauer makes the requisite call for unity in the wake of this ferkakte election—as he points out, “united” is right there in the name of the denomination. But he doesn’t back an inch off the call for the church to be agents of social justice. Again, as he rightly points out, justice is at the core of the UCCs newly adopted vision statement.

In fact, it’s almost all of the vision statement. I admittedly haven’t been the biggest fan of that vision—I think it’s reductive—but in these grim days for those opposed to the ascent of America’s Problem Child, I’m sure as hell glad that some Christian body is showing leadership. More like this, please.