By The Ladies Finger

“If it comes out, it will be like a tsunami,” the nun Manju Kulapuram said, earlier this year, about the rampant sexual abuse of women by the men of the Catholic church in India. Evidently, Kulapuram was onto something — and it’s across denominations, nor confined just to the Catholic church. Unlike other work places, which in theory are meant to have set up mandatory internal complaints committees, there is no formal institution in place that addresses sexual abuse inflicted by members of the clergy.

On 14 November, a woman based in Kozhikode registered a police complaint about a parish priest in Nadakkavu St Mary’s English Church. She alleged that he sexually harassed her over email and messages after she contacted him with a request to pray for her daughter on her birthday in August. She complained to the bishop at the Malabar Diocese of the Church of South India, even showing him copies of the interactions with the priest, but was not taken seriously: the bishop said there were plenty of other churches in Kozhikode that she could attend. Although the priest was briefly transferred to Nilambur in September, he was back at Nadakkavu in just over a month. It was only after she contacted the police through Anweshi, a women’s counselling centre that a case was registered and the priest was charged under Section 509 (word, gesture or act intended to insult the modesty of a woman). 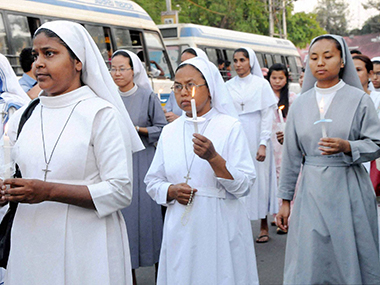 Numerous cases have not made it that far. A 2016 report suggested that when higher-ups of the church are alerted to these incidents, they often choose to either ignore them or, at the most, transfer the perpetrator. Sr. Kulapuram says that a fellow nun was videotaped while bathing, by a seminarian, while they were both attending a seminar away from home; she was dissuaded from pursuing the legal route and told that she’d get justice from the church. This never materialised — the priest was sent to Rome to continue his theological studies, and the victim abandoned religious life altogether. A version of the familiar promotion-for-accused and demotion-for-victim model.

Things may have changed since the 1950s, when fellow priests are said to have advised Reverend Louis Brouillard, a serial child molestor in Guam, to do regular penance instead of stopping him. But abusers still tend to get off with minimal official punishment.

A case in point is the apparent reinduction of a convicted child molestor, Father Joseph Palanivel Jeyapaul, into the Roman Catholic Church of South India in January. One of his victims from Minnesota says that she was 14 when he first raped her in his parish office, and during the year-long period of abuse, he forced her to say that she contributed to his becoming impure. Although Jeyapaul was sentenced to one year of prison in Minnesota, where he had been posted previously, in 2015, he served a shorter prison term under the condition that he would not return to work that kept him in contact with children. When he returned to India, a bishop lifted the five-year-old suspension, apparently in consultation with Rome.

This August, Shanthi Roselin took on the Catholic church after an investigation into the murder of her 17-year-old daughter by a Walayar priest in Kovai, Tamil Nadu, three years ago, revealed that church authorities were very much aware of her having been sexually assaulted. Strangely enough, they reported it to Rome while hiding the information from the local police. A report in The Indian Express describes Roselin reiterating how unfathomable the priest’s breach of trust was by stating repeatedly, “He was our God”. The police finally arrested five Catholic priests associated with the intentional omission of crucial information about the girl. But the leniency and the long delays give perpetrators ample time to threaten their victims. This was frighteningly apparent in a case where a Catholic priest in Kerala, who had abused a man for over a year, had his brothers intimidate the victim with death threats and demand that he withdraw his complaint to Church authorities.

Another in-depth study of sexual abuse by the clergy cited Virginia Saldanha, who had worked for years with the Federation of Asian Bishops’ Conferences, and said that the frequent cry about sexual assault complaints being dealt with ‘in-house’ really meant that the victim would be harried.

Shalini Mulackal, the first female president of the Indian Theological Association, confirms, is that nuns rarely disclose incidents because of the surrounding taboo

The Catholic Bishops’ Conference of India announced in August that it was going to draft a policy after a letter from the Forum of Religious for Justice and Peace, an advocacy group for religious women, told them that the number of cases of sexual abuse were increasing. Bishop Theodore Mascarenhas, the secretary general of the Catholic Bishops’ Conference, said the tentative title was ‘Policy on Sexual Harassment in Work Places’, suggesting it would mirror the policies used in other work places. He was vague about the contents of the draft, but insisted it would address sexual harassment in the Church “systematically and comprehensively”.

Others have rather less faith in the glacial pace or trajectory of the Catholic Church. Because the Lord may move in mysterious ways. In September, Astrid Lobo Gajiwala, the head of a Christian women’s collective, argued at a meeting of Christian women’s groups in Hyderabad, that individuals should move outside the Catholic Church and follow the law. The meeting ended with the decision to start a legal subcommittee under the Indian Christian Women’s Movement to record cases of harassment and assault, provide counseling for victims and introduce new protocols for dealing with sexual abuse.

In 2015, Spotlight took to the big screen the real-life cover-up of decades-long child abuse by Roman Catholic priests in Boston. When the film was released, the Boston archdiocese told the media that there is “zero abuse” taking place today — sounding about as believable as the statement made in April this year by Philemon Doss, the president of the Conference of Diocesan Priests of India: “In India, it [child sex abuse] is not very rampant, maybe in foreign countries [it is].”

That the Vatican formally created a church tribunal for addressing and holding accountable bishops who were involved in cover-ups of sexual assault only in 2015 is appalling. Perhaps the guidelines for tackling sexual abuse that were formulated by the Catholic Bishops’ Conference in late September will resemble the policies used by other workplaces. But the situation at the moment, as Shalini Mulackal, the first female president of the Indian Theological Association, confirms, is that nuns rarely disclose incidents because of the surrounding taboo. When they do, the bishops in charge don’t do much besides transferring the priest accused of sexual abuse or offer him counselling. Or send them on a Roman Holiday.