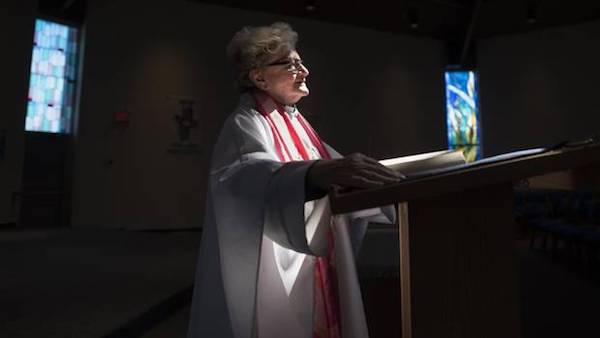 Rev. Fuller, pastor of a newly formed faith community in Pickering, has been revising, refining and rehearsing the homily for this weekend’s inaugural mass at St. Mary of Magdalene the First Apostle Catholic Faith Community.

The passage connects the theme of Pentecost – a feast day celebrated in all Christian churches this weekend – to gender equality and inclusivity, issues close to Rev. Fuller’s heart.

But Rev. Fuller is no ordinary Catholic priest prepping to preach to his flock; rather this is Rev. Roberta Fuller, an ordained Roman Catholic Woman Priest (RCWP). The petite septuagenarian and retired high-school teacher is regarded by some as a courageous spiritual leader and by others as a disrespectful dissident.

Ordained in 2011, Rev. Fuller maintains she has as legitimate a claim to the priesthood as any male Catholic priest. The Vatican disagrees and warns that sacraments performed by women priests are just “simulations.” Women priests are forbidden to serve in any official capacity and in 2007 the Congregation for the Doctrine of the Faith, under Pope Benedict XVI, decreed automatic excommunication against anyone “who attempts to confer a sacred order on a woman, and the woman who attempts to receive a sacred order.”

Neil MacCarthy, spokesperson for the Archdiocese of Toronto, says that the parish’s home, Dunbarton-Fairport United Church, reflects the illegitimacy of Rev. Fuller’s congregation.

“The very fact that their services take place in a United Church should be a clear indication that what is happening is not, in any way, sanctioned by the Roman Catholic Church.”

There are 12 women Catholic priests in Canada (and some 300 worldwide); many hold their masses in sympathetic United churches. Rev. Fuller launched a similar progressive community, Church of the Beatitudes, in the Toronto neighbourhood of Roncesvalles in 2014. The parish attracted a devoted, if modestly sized, flock varying in size from week to week, with 40 at most in attendance. Sometimes there were as few as half a dozen in the pews. She is hoping for more robust attendance in this new community. The Pickering services will be held the first and third Saturday of the month.

Rev. Fuller rejects the notion that her ordination and calling are illegitimate. “That’s simply not true,” she says. “Despite what some bishops lead the faithful to believe, we follow and honour Roman Catholic tradition and the liturgy of the church.

“We are ordained in apostolic succession just like any priest.”

The RCWP movement was born in 2002 when a Catholic bishop (known as Bishop X to protect his identity) broke with tradition and ordained seven women. Guided by his own conscience, he conducted the ceremony on a boat on the Danube River to avoid diocesan jurisdiction and interference. These original women priests are often referred to as “the Danube Seven.” Apostolic succession comes into play because Bishop X, who had been ordained by another bishop in good standing, is linked to a line of bishops that goes back to the time of the Apostles. Supporters argue this lineage now extends to the rebellious women on the Danube and all their successors.

Rev. Fuller, who isn’t too concerned about canon law and Vatican pronouncements, remains focused on her mission: “to foster loving, supportive communities where all are welcomed at the table.” On the invitation to the inaugural mass, she describes St. Mary Magdalene as a “radically reform, inclusive parish that celebrates all sacraments and serves the community while working for gender equity and social justice for every woman, man and child.”

Rev. Fuller believes that too many people – the LGBTQ community, and divorced and remarried Catholics – have been made to feel like second-class Catholics for too long.

Jeff Doucette, pastor at Dunbarton-Fairport United Church, says his own ministry is totally aligned to Rev. Fuller’s vision of inclusiveness. “When I heard Roberta needed a place, I immediately wanted to support her. I felt confident that our board would agree, and I was right. They voted unanimously to allow her to celebrate mass here.”

Rev. Doucette is a former Roman Catholic priest who left, in part, because of the chasm between his own beliefs around justice and those of the church. He met Rev. Fuller after he read about her original parish in Toronto and, impressed by what she was doing, decided to go meet her.

“It floors me that the Catholic Church is still so rigid about this,” he says. “We have amazing women leading our United Church congregations. And there are incredible Catholic women, with authentic callings, who can bring a whole side to the gospel that we as men can never bring. Leaving them out of the equation is like asking the church to breathe with one lung.”

It frustrates Rev. Fuller immensely that women are willing to serve and yet the church instead recruits male clergy from all over the world – many with limited English-language skills and a cultural disconnect with their parishioners. “When I was studying theology at St. Michael’s College [in the University of Toronto], I met so many capable qualified young women who could fill the priest shortage. But the door is shut to them.”

People often ask Rev. Fuller, a life-long feminist and human-rights activist, why she keeps struggling with an institution as patriarchal as the Roman Catholic Church, particularly when she could easily step into a leadership position in almost any other Christian denomination.