“My mother, almost 90 years of age, had to discover that from the Belfast Telegraph three weeks ago.”

FORMER IRISH PRESIDENT Mary McAleese has defended her comments about the Catholic Church’s attitudes to women, while revealing her brother was abused by a priest. 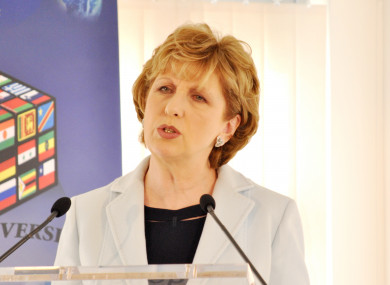 Speaking in Rome last week, McAleese said that she believed women should be ordained as priests.

“Pope Francis has said that the issue of women’s ordination isn’t up for discussion, that women are permanently excluded from priesthood.

“I believe that women should be ordained, I believe the theology on which that is based is pure codology. I’m not even going to be bothered arguing it. Sooner or later it’ll fall apart, fall asunder under its own dead weight.”

She said that many in the Church had made Jesus Christ a “rather unattractive politician who is just misogynistic and homophobic and anti-abortion”.

The former President, a devout Catholic, today defended those comments and spelled out her frustrations with the Catholic Church. In a wide-ranging, emotional interview she told Sean O’Rourke on RTÉ Radio One that she felt free to make the comments.

“I’m asking you a question now – do you think there’s a book somewhere – have you seen a book of phrases that are appropriate for ex-Presidents to use?

“My church tells me I have a duty to offer my opinion on matters that I believe are for the good of the church.”

McAleese said that women had “drifted” from the church and said that the church would “pay a price for that”.

She said the hierarchical church needed a major overhaul, but paid tribute to the pastoral church, which she said was “infused with love”.

McAleese became upset when asked about Malachy Finnegan. Fr Malachy Finnegan, who died in 2002, was a teacher at St Colman’s College in Newry from 1967 to 1976. Abuse claims against him were detailed in a BBC Spotlight programme in February. The revelation that John McAreavey had officiated at the funeral mass of Finnegan led to his resignation as bishop of Dromore earlier this month.

McAleese said that Finnegan’s abuse had touched her family.

My youngest brother, my baby brother, the youngest of nine children, was seriously, physically, sadistically abused by Malachy Finnegan.

My mother, almost 90 years of age, had to discover that from the Belfast Telegraph three weeks ago.

McAleese said that the abuse went on for her brother’s entire time at the school.

“The first complaints about Malachy Finnegan go back to the 1970s, which means there is a body of evidence of people able to do something about this, but didn’t.”

She said that there is “very serious questions to be asked” and said that it “shouts for an inquiry”.

She went on to say that she believes that the debate on Eighth Amendment should take heed of the opinions of obstetricians who believe the law fails in its stated aims of protecting women.

She said that “at the moment” that testimony is “quite compelling” and has raised questions for her. However she said it was “infinitely more complicated” than the same-sex marriage debate.

“I would say very strongly that we’re being offered two models – a medical intervention model and it may very well be that that is so tightly drawn that obstetricians say a mother’s life is at stake.

“The move to a non-medical model – where a foetus is healthy – is quite a jump for the Irish people. But that is a matter for the Oireachtas.

She said that she had a “lot of reading to do” before the vote, but said that she would not be involved in the campaign in any way.