With 66.4% of voters saying yes to abortion  in Ireland’s referendum, the Catholic Church has felt its significant political influence over the Irish population diminish. This referendum repeals a ban dating back to 1861, reinforced by the 1983 referendum instituting the constitution’s Eighth Amendment. The changes for Catholicism can be seen further in recent comments from Pope Francis. He assured a gay Chilean and sexual abuse victim Juan Carlos Cruz that God made him and loves him the way he is. Thus, May 2018 appears to be another turning point in the Catholic Church’s global influence. 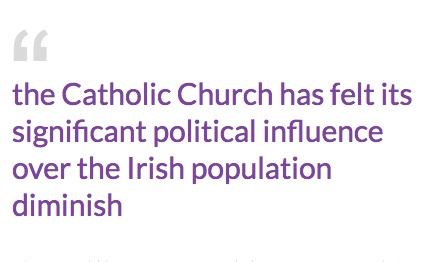 The repeal of the Eighth Amendment marks a progressive step forward in the recognition of women’s rights and respect for the LGBTQ community. In Ireland’s referendum, those who voted yes to repeal the Eighth Amendment included those of all ages and genders, many of whom would have once opposed abortion. For example, two elderly ladies stated, ‘The church always told us what to do and now it’s time for us‘. They rejected a law that has caused numerous Irish women needing abortion to travel to the UK, where abortion is legal, or face serious medical situations, such as in the tragic case of Savita Halappanavar’s death in 2012. The health-based pro-choice arguments have thus outdone and delegitimised the pro-life arguments driven by religion.

This a victory – or rather a relief – for women and families previously neglected by Ireland’s conservative legislation, but it should not be something to lament for the Church itself. The Irish population has not abandoned Catholicism as a religion, as 78.3% of Irish people still identified themselves as Catholic in 2016. Catholicism, as a religion and a culture, still runs in Irish people’s blood. The nation’s Catholic institution should not feel bound to retreat into the shadows of modern secularism. Rather, it needs to accept a change in its role, priorities and identity. The May referendum simply shook the Catholic Church as an institution of power. Catholicism in Ireland can now serve less as a tool to control people’s lives, and more as a system of faith and worship. 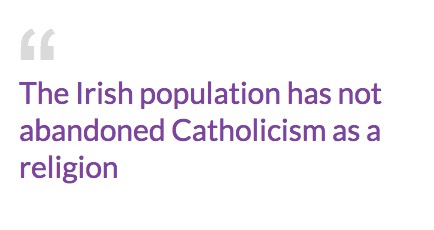 is Archbishop of Dublin Diarmuid Martin. He has recently expressed progressive views on a number of social issues, including the need to accept same-sex marriage in 2015. Regarding the abortion referendum, he acknowledged that the church had been seen as ‘weak in compassion’ by the Irish public. However, he has added to his criticism a suggestion of a new path for the church in Irish society. This entails a different interpretation of the Christian concept of ‘pro-life’. He appropriately argues that ‘pro-life’ means supporting marginalised, impoverished and suffering people. His approach could positively revive the role of the church in Ireland, if other priests and bishops are willing to follow his steps. 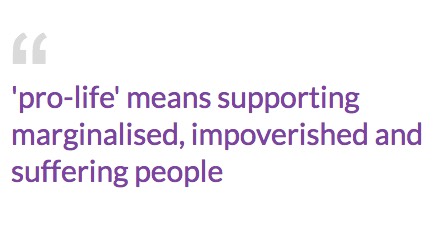 When the church expresses its dismay over the legalisation of abortion and same-sex marriage, it forgets its main purposes in society. As Archbishop Martin indicated, this purpose should be to actively provide support and charity when people want and need it, and to guide those who have invested strong beliefs in God on a deep, personal level. If the majority of the Irish public have stated, with their conscience, that abortion is no longer a sin worth worrying about, the church needs to accept this reality. The majority of the Irish public is as Catholic as the priests and bishops running the Church. There is no reason, when this same public demands that abortion be legalised, why abortion should undermine the many other, more meaningful values of Catholicism.

The Pope increasingly recognises this necessity to change the church’s mentality. Unfortunately, his acceptance of homosexuality is not all that progressive, since he has not really endorsed homosexual activity. However, his comments signalled the Catholic Church’s step back from criticising its followers for matters that not even the most conservative of religious figures should consider to be as grave as real global problems today. Following these developments this May, the more religious institutions accept progressive ideas, the more they can restore the image of themselves as bringers of hope and good.