Some Catholic leaders are using the sex abuse crisis to unseat Pope Francis. 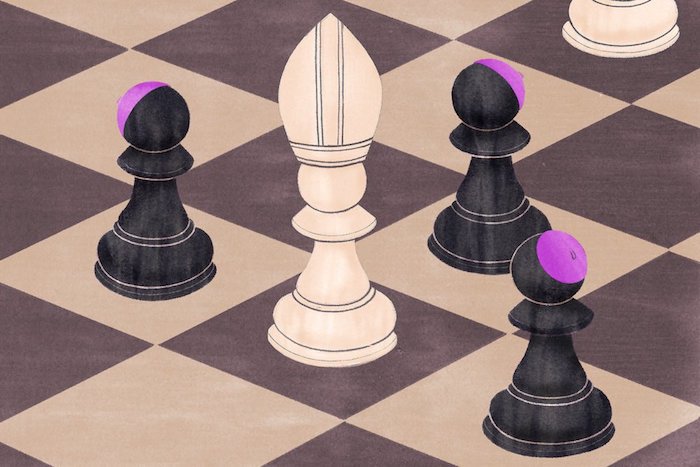 In August, in a letter published in the National Catholic Register, Italian Archbishop Carlo Maria Viganò blamed the Roman Catholic Church’s sexual abuse crisis on gay priests who “act under the concealment of secrecy and lies with the power of octopus tentacles, and strangle innocent victims and priestly vocations, and are strangling the entire church.” Pope Francis, he wrote, had sheltered such priests. Viganò specifically named Theodore McCarrick, a “serial predator” who resigned as a cardinal in July after the news broke that he’d sexually abused adolescent boys while rising to become one of America’s most prominent archbishops. Viganò called on Francis to “set a good example” and resign, along with the other cardinals and bishops implicated in the scandal. He wrote little about the fact that McCarrick’s abuse took place during the papacies of Francis’s conservative predecessors, John Paul II and Benedict XVI. Whatever Francis knew about McCarrick, the previous popes likely knew more. But their complicity was overlooked.

Viganò belongs to a traditionalist wing of the church that has never truly accepted Pope Francis. In the United States, this contingent includes Cardinal Raymond Burke of St. Louis, San Francisco Archbishop Salvatore Cordileone, and Philadelphia Archbishop Charles Chaput. These powerful clergymen aren’t just conservative on theological matters, but in their politics as well. While serving as the Vatican’s apostolic nuncio, or ambassador, to Washington, Viganò was responsible for introducing Pope Francis to Kim Davis, the Kentucky clerk who refused to grant marriage licenses to gay couples in 2015. From San Francisco, Cordileone publicly supported California’s Proposition 8, which opposed same-sex marriage, raising over $1 million to get it on the ballot. Chaput has called on the University of Notre Dame to give President Donald Trump an honorary degree. And Burke plans to partner with former Trump campaign chief Steve Bannon to construct a Catholic compound near Rome that will host meetings and seminars with church leaders and politicians interested in protecting “Christendom.”

In late August, several conservative American bishops and their allies published letters in support of Viganò, even after journalists from The Washington Post and The New York Times reported that he had likely exaggerated many of the claims he made in the Register. They are using the worst crimes of the church to attack Francis and his liberal policies. What should have served as a reckoning has been transformed into an opportunity to take him down.

Francis has been fighting off critics practically since the day he was elected in 2013. When Benedict, a Bavarian theologian nicknamed “God’s Rottweiler,” stepped down earlier that year, he still had significant support in the Vatican for his most extreme conservative stances—he once quoted fourteenth-century texts that criticized Islam as “evil and inhuman”; lifted the excommunication of a British bishop who denied the Holocaust; and claimed condoms worsened the fight against AIDS. Since then, conservative dissenters in the Catholic hierarchy have formed a resistance of sorts, pushing back against Francis’s pronouncements on divorce, immigration, climate change, and poverty.

Much of this resistance comes from the United States. Although 63 percent of American Catholics support the pope, according to a recent CNN poll, conservative clergy and wealthy Catholic donors remain among his fiercest critics. Their most common line of attack focuses on Francis’s supposed support for gay priests. In 2013, the pope quipped, “Who am I to judge?” when asked about gay Catholics. Two years later, he met with an openly gay former student, Yayo Grassi, and his partner in Washington. And more recently, he asked James Martin, a Jesuit priest who has written a book on LGBT Catholics, to deliver a talk at the World Meeting of Families in Ireland this past summer. Francis has actually taken no official action to change church policy about homosexuality, but conservatives have still reacted in horror. In May, when Francis told a gay Chilean sexual abuse survivor that God made him gay and loves him anyway, American Conservative columnist Rod Dreher said the pope was destroying the church like a “wrecking ball.” Conservatives like Dreher maintain that gay priests are the main perpetrators of child sexual abuse, and that their powerful supporters within the Vatican—whom Dreher calls the “lavender mafia”—are responsible for harboring them.

Of course, there is no evidence of a higher rate of abuse among gay clergy; in fact, abuse, religious and secular, is most commonly the result of “situational generalists” who abuse whoever is in their control, male or female, children or adults. But that hasn’t stopped conservatives from arguing that gay men are responsible for the abuse crisis. In his letter, for example, Viganò uses the word “child” twice; “homosexual” appears 16 times. Cardinal Burke compared gay priests to murderers in a 2015 interview with LifeSite News, a pro-life web site. The problems the church faces, from child abuse to a lack of men applying to the priesthood, he once said, are because it has become too “feminized,” which, given Burke’s track record, could be taken as a way of saying “too gay.”

The conservatives attempting to blame gay priests for sexual scandals appear to have two main objectives. First, they hope to purge the church of its gay clergy. And second, they want Francis out. Because he has softened the church’s stance on LGBT issues, his opponents can accuse him of sheltering gay priests and, in their minds, saddle him with responsibility for the sexual abuse crisis, despite the fact that it began long before he was elected pope.

No one yet knows how much Francis knew about the abuse. On the papal plane hours after Viganò’s letter was released, he did not deny the charges leveled at him. Instead he told journalists on board, “You have the journalistic capacity to draw your own conclusions.” A strong denial would have been preferable, under the circumstances—he was traveling back to Rome from Ireland, where he had just met with victims of sexual abuse there, which reached such a horrific scale that an entire generation of people had left the church. The pope later said the meeting left a “profound mark” on him. Presented with the letter so soon after seeing the traumatized victims, he may simply have been too shaken to answer. Or it could mean that Francis did know about McCarrick. He has been pope for five years. He could have taken a stronger stance against sexual abuse in the church already. He still can.

But amid this muddled, internecine conflict, one thing is clear: Conservative attempts to tear Francis down, while absolving his predecessors and blaming a global sexual crisis on gay priests, are sinister and abusive. The problems of the Catholic Church stem not from homosexuality but from an entrenched culture that protects clergy—and the church itself—at the expense of the people they are meant to serve. Long ago, the Vatican and its leadership lost their connection to the ordinary lives of the billion Catholics worldwide. Now, they privilege reputation above truth, and, like many of the current accusations flying around, that instinct is rotten.