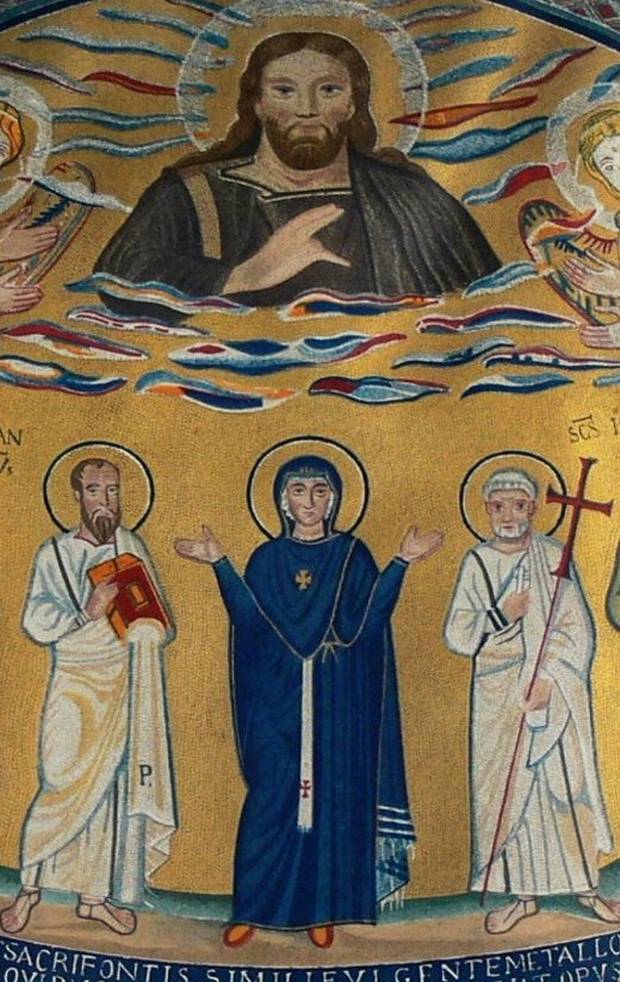 There is “overwhelming evidence” that women served as clergy in the early years of Christianity – and some of the evidence was deliberately hidden by the Vatican, according to ground-breaking new research.

Experts in theology and the early history of the Catholic Church heard Dr Ally Kateusz, research associate at the Wijngaards Institute for Catholic Research, outline the findings at a conference hosted by the International Society of Biblical Literature at the Pontifical Gregorian University in Rome yesterday.

Dr Kateusz, the author of ‘Mary and Early Christian Women: Hidden Leadership’, bases her research findings on the depiction of women as clergy in ancient artefacts and a mosaic in a Roman church in which Mary, the mother of Jesus, is depicted as a bishop.

She revealed that this mosaic contained a red cross on a vestment that only bishops wore.

But it was covered over with white paint on the orders of the Vatican “to disguise the fact that Mary was portrayed as a bishop”.

The findings are set to challenge the long-held dogma in Catholicism that women cannot be priests, strictly enforced since Pope John Paul II, who also ruled that the issue of female priests could not even be discussed on pain of excommunication.

Some of the six Irish priests who have been censured by the Vatican in recent years were targeted over their support for women in the priesthood.

According to Dr Kateusz, the three oldest artefacts anywhere in the world depicting Christians at the altar in churches all portray a woman at the altar.

“They depict women at the altar in three of Christendom’s most important churches – St Peter’s in Rome, the Hagia Sophia in Constantinople and the Church of the Holy Sepulchre in Jerusalem,” she said.

Miriam Duignan, spokesperson for the Wijngaards Institute, said: “This is evidence that women served as clergy in some of the most important churches in Christendom.”

Some of the research relates to an ivory reliquary box dated around 430AD which shows a female priest at the altar in Old St Peter’s Basilica in Rome.

Speaking about the Lateran Baptistery in Rome and the hidden mosaic there, Dr Kateusz said: “Pope Theodore commissioned this mosaic including the bishop’s pallium [on Mary]. Her arms are raised as if performing the Eucharist. It is a symbolic way of saying Mary was a church leader.”