The US-based group is holding a conference today in Dublin. 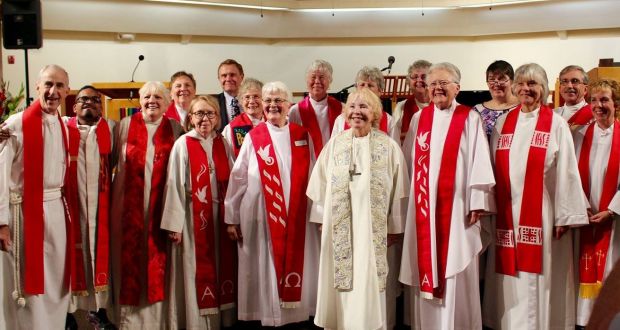 THE ASSOCIATION OF Roman Catholic Women Priests is hoping to have a conversation with Irish women to see if their message “touches their soul and fires their spirit”.

The US-based group, which promotes equal rights and justice for women in the Catholic Church, is holding a conference today in Dublin.

The association has held events in the Republic of Ireland and the North in 2017.

They believe in defying the Vatican’s ban on women becoming members of the clergy.

The group claims that the Vatican states the ordained women are excommunicated. However, they do not accept this and are of the stance that they are “loyal members of the church”.

Bridget Mary Meehan, based in Florida in the US, is speaking at the event.

Explaining the purpose of the association, Meehen said: “It is a renewed model and we believe it’s really more in line with the model that Jesus had because his table was always open to everyone.

We’re trying to really put in play here, and everywhere in the Catholic Church, a new model that welcomes everyone, that’s hospitable to everyone, that everyone finds their home there.

The Association believes that everyone should be welcome in the Church, such as the LGBT community and those who have been divorced.

“What we feel is very missing in the Roman Catholic Church is the rights of women, the equality of women, the leadership of women as spiritual equals,” Meehan said.

The movement began with the ordination of seven women on the Danube River in 2002. The first women bishops were ordained by a male Roman Catholic bishop.

Meehan explained that they call this man ‘Bishop X’.

“He is a bishop who ordained these two women in secret because he wanted it to be a women-led movement, so he just did the first ordinations of these women bishops,” Meehan explained.

From there, the movement began to spread across North America, Latin America and elsewhere in Europe.

The Vatican does not recognise the women. Meehan said she had been ex-communicated from the Catholic Church.

Nonetheless, after she was ordained, Meehan set up a congregation in her home in Florida.

“There were Catholics who were ready. They were sick and tired of the exclusivity of the institution,” she said.

The Association of Roman Catholic Women Priests currently has congregations in 13 countries and 34 states in the US.

Today, the association is holding a conference at the Maldron Hotel beside Dublin Airport this afternoon between 2pm and 4pm.

Meehan will be speaking alongside Mary Theresa Streck, another member of the association, and theologian Angela Hanly.

Meehan is hoping the event will “gather women who really want to have a serious conversation” about their movement.

“We’re looking for women who are leading inclusive communities now, who are ready to do it now, or who are already doing it now,” she said.

She added that they are aware of a group of women in Dublin who are already involved in an “inclusive community”.

Speaking of those who may turn up to the event, Meehan said: “We want to have a conversation with them to see if it’s something that really touches their soul and fires their spirit as a new way of bringing about justice in the church.”