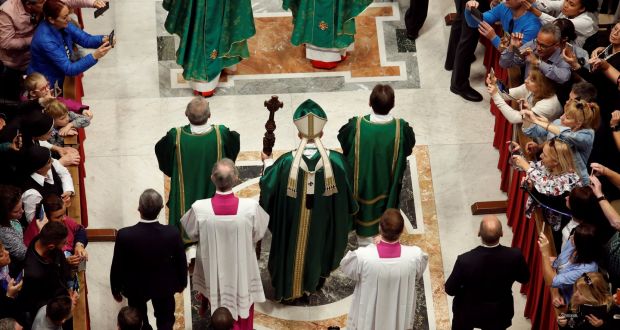 A Catholic priests’ group has said it will continue to advocate for the ordination of women within the Church.

Speaking ahead of the Irish Association of Catholic Priests annual general meeting on Wednesday, spokesman Fr Roy Donovan from the Archdiocese of Cashel and Emly said the organisation would discuss the ordination of women and married deacons.

The Catholic Church’s treatment of women as second class citizens and its failure to consider the ordination of women to the priesthood is a “massive injustice at the heart of the Church”, Fr Donovan said

A discussion around the ordination of married deacons, in light of the recommendations from last week’s Amazon synod, will also be top of the agenda at the association’s AGM in Athlone on Wednesday, confirmed Dr Donovan.

Many priests who have left the ministry to get married could bring a “huge richness and wisdom” to the Church if they were allowed to return as leaders, he said.

Despite the recent summit’s more open minded approach to the ordination of married deacons in the Amazon region, it continues to fail to address the issue of inequality for women within the Church, said Fr Donovan. “Women can’t become deacons at the moment which means there’s no opportunity to become leaders. The synod has left women as second class citizens. The Church is not treating women as human beings and it’s a massive injustice at the heart of the Church.”

While Pope Francis has shown openness towards the issue of married deacons, Fr Donovan does not expect him to be equally accepting of the ordination of women. “He doesn’t have it in him to embrace full equality for women. But we’re running out of time. The Church needs these changes now and women need these changes. Obviously he’s trying to keep a balanced approach but he’s moving very slowly, he needs to crack the egg now.”

Citing the results of a survey carried out in the Killala diocese earlier this year which found nearly 70 per cent of parishioners backed women being ordained to the priesthood, Fr Donovan said it was clear the general public wanted to see equality of the sexes within the Church. With the low number of men entering the vocation at crisis level, immediate changes are needed to ensure the survival of the Church, he said.

At present, with the collapse in numbers, priests are unable to fully retire, said Fr Donovan, adding that between 25-30 men aged over 75 had remained on as curates in his own parish to “keep the system going”.

“A lot of priests are over-worked and I think more and more priests are going to retire early rather than bolstering up this dysfunctional system. The reality is in the next 10 years there will be lots of parishes without priests.”

Wednesday’s AGM will also discuss the recently updated charter of fundamental rights for the Church which states that all Catholics should be treated equally and that there is “no place among Christ’s faithful for any discrimination on the basis of gender, nationality, language, ethnic origin, sexual orientation, age, social status, political or theological views”. The topic of how the late Fr Seán Fagan was silenced by the Church is also expected to be discussed.