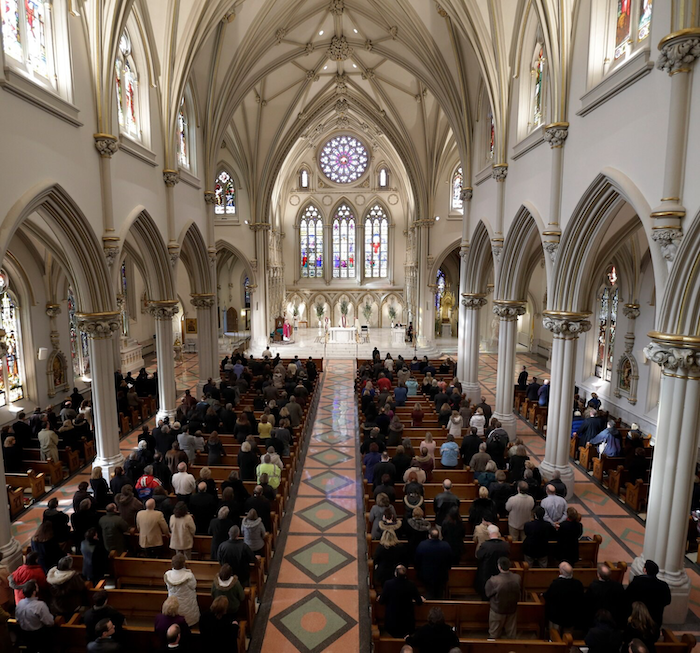 The Vatican on Wednesday announced the resignation of Bishop Richard J. Malone, who stoked fury in his Buffalo diocese for the alleged mishandling of sexual abuse claims, and whose tenure became emblematic of the Catholic Church’s struggle to overcome its central crisis.

Under Malone’s watch, Buffalo had become perhaps the U.S. Church’s most scandal-tainted diocese. It faces an FBI probe and more than 200 lawsuits. Malone pledged to institute reforms, but he was instead battered by accusations of coverup and by embarrassing leaks. One whistleblower said she found a 300-page dossier on accused priests hidden away in a supply closet near a vacuum cleaner.

In a short statement, the Vatican said that Malone would be replaced on a temporary basis by Albany’s bishop, Edward Scharfenberger.

Malone, 73, is departing two years before the mandatory age at which bishops must offer their retirements to Pope Francis — though many prelates stay on the job beyond the 75-year mark. The Vatican did not explain the reasons for Malone’s resignation.

Malone’s case offers mixed signals about how the Vatican is dealing with bishops accused of negligence or coverup and whether changes drawn up by Francis will help the institution police its upper ranks.

The Vatican did not use a system, put in place by the pontiff earlier this year, that would have allowed the region’s top bishop — in this case, Cardinal Timothy Dolan of New York — to open an investigation. Instead, in something of an ad hoc measure, the Vatican dispatched a different prelate, Bishop Nicholas DiMarzio, on a “nonjudicial” fact-finding mission to Buffalo.

The Associated Press reported last month that DiMarzio himself is facing accusations of sexually abusing a child. DiMarzio denies the allegations.

For more than a year, Malone had resisted calls to step down. But the pressure ratcheted up as the revelations seemed to build. In September, a Buffalo television station broadcast audio, secretly recorded by the bishop’s priest-secretary, in which the bishop worried about what might happen if the sexual harassment accusations that a seminarian had leveled against a priest became public.

“This could be the end for me as bishop,” Malone said in the leaked recording.

But the situation was even more convoluted. The seminarian, Matthew Bojanowski, accused Malone of failing to take actions against the parish priest. Meantime, news outlets obtained a letter from the bishop’s priest-secretary to Bojanowski that suggested the two had a romantic relationship.

In September, Malone held a news conference in which he awkwardly tried to make sense of the “complex situation” and faced sharp questions about his judgment.

The local congressman called on Malone to resign. So too did a council of prominent Catholics. A petition calling for Malone’s departure gathered more than 12,000 signatures, accusing him of deceit and for being a “silent accomplice” to the crimes of priests. A Buffalo News poll in September said that 86 percent of Catholics wanted him to resign. Picketers had followed the bishop to recent events, and the newspaper reported that the diocese had ceased publishing the bishop’s event calendar.

“Bishop Malone did this to himself by ignoring the problems that existed in Buffalo,” Bojanowski said by email. “He lied to the people, wanting them to think that there was transparency, when all there was were coverups upon coverups.”
“There are many priests in Buffalo that need to be laicized,” Bojanowski continued. “Bishop Malone leaving is just a start, but far from over. Buffalo is in desperate need of a strong leader who will stand up to the many bully priests that don’t want to serve their community, but rather just serve themselves.”

Malone has been bishop of Buffalo since 2012. Last month, he traveled along with other New York State bishops to the Vatican and met with Pope Francis. After returning, Malone issued a statement that gave no indication he planned to step down.

“In a few words spoken privately to me, it was clear that the pope understands the difficulties and distress we here in Buffalo, and I personally, have been experiencing,” Malone said at the time. “He was very understanding and kind.”
The problems for Malone escalated early in 2018 when an initial accuser came forward, describing molestation as a teenager at the hands of a priest. A wellspring of abuse complaints followed, and in March 2018, Malone released a list of 42 priests who had been credibly accused of abuse, mostly from earlier decades. But it was anything but full transparency: Malone’s former administrative assistant had seen an earlier draft of the list. It contained more than 100 names.

Going public to “60 Minutes” last year, the former administrative assistant, Siobhan O’Connor, accused Malone of wiping some of the most problematic names from the public record. One of the missing names was that of a priest who had been accused of inappropriately touching two boys. According to the “60 Minutes” report, Malone endorsed that priest for a job as a cruise ship chaplain.