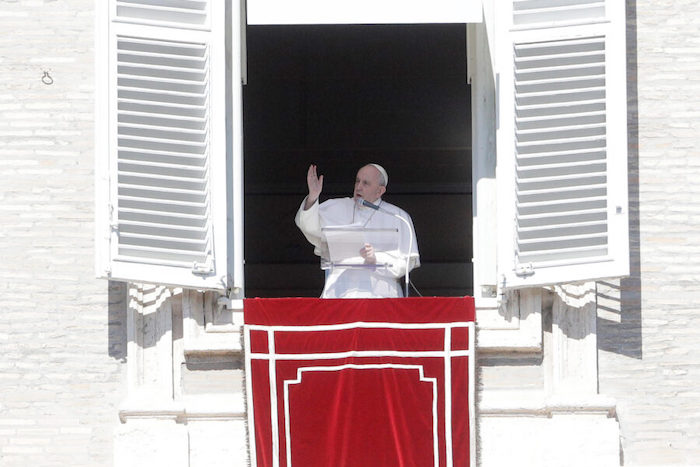 The disclosure this week of Pope Francis’ support of same-sex civil unions sent shockwaves through the Catholic Church and progressive and conservative circles alike. It came in a papal interview in “Francesco,” a documentary that premiered Wednesday, and represented a major break with Vatican teaching, leaving many wondering whether an official change might be coming soon. In the film Francis says, “What we have to create is a civil union law. That way they are legally covered.” The Gazette spoke with Francis X. Clooney, S.J., Parkman Professor of Divinity and professor of comparative theology, about the pope’s comments and what they mean for members of the Catholic LGBTQ community.

GAZETTE:  What was your reaction when you heard about the pope’s comments on same-sex unions?

CLOONEY: On the one hand, it’s not surprising at all, because Archbishop Bergoglio [now Pope Francis] struggled with the issue of formal marriage relationships when he was in Argentina and pointed to a compromise such as calling same-sex unions civil unions and not marriage. This debate is similar to what we went through in this country a decade or so ago. But I think Francis’ openness to same-sex unions is also more fundamentally representative of his instinct that human beings have a right to be together, a right to union, a right to family, and therefore, that it would be unjust to provide no way at all for people to live together as a couple. I think it’s his basic sense of human compassion and his openness to finding ways to help people to live the lives that they feel they must live.

On the other hand, you can’t imagine previous popes speaking in this fashion. That doesn’t mean that someone like John Paul was not a compassionate person, but they were so clearly linked to, focused on, church doctrine, and the preservation of marriage between a male and a female and, given their attitudes toward homosexuality, they simply wouldn’t speak in this fashion, whatever they may personally have felt. And I think what is new here is that Francis, as all the reports say, is in the non-authoritative context of a documentary — not sitting on the chair of Peter as pope making a proclamation ­— speaking his mind as probably most Catholics in the West would also speak their minds and say, “Well yes, some kind of way to allow people to live their lives happily and in peace is what matters.”

GAZETTE:  Does this change anything about the church’s overall doctrine?

CLOONEY: Probably not, because he hasn’t pushed it that far in terms of recognizing gay marriages. But implicitly, it’s undercutting the rhetoric that being gay is a grave disorder or that being gay and living out a gay commitment is something that God disapproves of. Francis is taking a positive attitude and therefore changing the climate, even if there are going to be Catholics who resist this greatly.

GAZETTE:  I know Bishop Thomas J. Tobin in Providence, R.I., has come out very strongly against this. Do you expect an even greater backlash from conservative and other voices in the church?

CLOONEY: Yes, but not as much as one might think. This news is based on a documentary, and it’s in keeping with things Francis has said previously. Conservative critics are not going to be surprised by this, even if they will be very annoyed by it. People who are against any compromise in this direction will see this as another sign that Francis has gone astray, that he is not adhering to church teaching. And they will add this to their list of complaints about him, even though he’s the pope and deserving of their respect. You may recall much earlier in his papacy, when people asked him about his thoughts on homosexuality, he said “Who am I to judge people in their lives?” This is Francis, and for many, this is a wonderful Francis; but for some, it’s the Francis they can’t abide, and they will continue to protest.

GAZETTE:  Can you see him pressing this forward to doctrinal change?

CLOONEY: Several years ago, when there was discussion with the pope and some of the bishops about divorced and remarried Catholics returning to Communion, Francis didn’t bite the bullet and declare that they’re welcome back to Communion if they’re in a stable second marriage. But he said that good priests, who know how to be pastoral, will know how to relate to people. It was as if to say: If a couple who are divorced and remarried comes to you, you’ll help them to find their way. My sense is that Francis is not the man as pope, particularly going on 10 years into his papacy, to be making declarations that push the church where it’s not ready to go. But rather, again, he is giving a green light, really, to priests and others involved in counseling couples to say we have to find ways to welcome Catholics as they are: Be pastoral; be like Jesus. And I think this opens the door, even though it will be controversial in some circles, to saying couples who are in a same-sex marriage are members of the parish and welcome in Catholic worshipping communities. Of course, in some dioceses, such couples will not be welcome to Communion. There will be differences in response and pastoral practice. So I think what is at stake is a kind of incremental pastoral disposition, whereby things will change, as they always have, only slowly. The pope is saying things that other popes never would have said previously. But I don’t see Francis being in the position to make any kind of daring pronouncement in the years to come about gay marriage. I wouldn’t anticipate that coming.