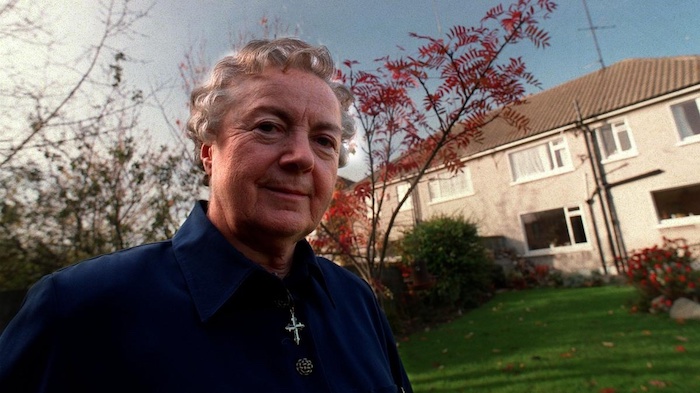 For my generation she was Margaret, without the nun’s habit; for the previous generation she was Sr Benvenuta, in full canonical clothing. For both generations her office in UCD became a place where secrets could become shared and thus diminished burdens, opprobrium eschewed and independence of mind encouraged.

I came to appreciate Margaret MacCurtain’s tenaciousness over 30 years and let me pay tribute to her on the occasion of her 90th birthday; to applaud her humanity, humour and brilliant teaching, and also her stubbornness, determination and creative subversion.

MacCurtain’s life and work reflect the second wave of the feminist movement in Ireland that emerged in the late 1960s, a reminder that this year marks the 50th anniversary of the announcement of a commission on the status of women. The commission’s report was published in 1972 and, alongside its many recommendations, expressed the aspiration that women would retrieve their own history.

MacCurtain embraced this challenge with gusto, despite the fact that, as she recalled: “Writing women into Irish history became a subversive activity for women historians in the 1970s. The universities were not ready for an innovation which, in the opinion of the historical establishment, possessed neither a sound methodology nor reliable sources.”

Despite such hindrance, as MacCurtain has recalled, there was a sense of optimism and determination about challenging this resistance in the 1970s, and for MacCurtain this involved building alliances within and outside academia. At a debate in UCD in October 1971, MacCurtain shared a lecture theatre platform with Mary Anderson and Nell McCafferty. Anderson suggested each of them make a short opening statement about the personal difficulties under which they laboured as women.

Anderson said: “I am a bastard.”

McCafferty said: “I am a lesbian.”

MacCurtain said: “I am a nun.”

McCafferty recalled: “The audience erupted in yells of pure, unadulterated pleasure. The exchanges that evening were a runaway train of untrammelled speech.”

That train ran into many barriers in subsequent years as there was still much resistance to equality and vocal women, but MacCurtain underlined the significance of translating alliances into meaningful retrieval of women’s history. Her mission was a way of giving meaning to her assertion, the previous decade, that the question of education “now lies within the domain of justice”.

MacCurtain remained a historian of the Reformation centuries; it gave her a wider sense not just of divisions in Ireland but also of common inheritances, including the heritage of the Middle Ages. But the spirituality that interested this Dominican sister most was non-sacramental; she recognised the greatness of Patrick Kavanagh and his epic poem The Great Hunger (1942) because he brought out both the longings and spirituality of the small farmers. Kavanagh had laid bare frustrations and suffocations, but also the moments of discovery:

“Yet sometimes when the sun comes through a gap

These men know God the Father in a tree:

The Holy Spirit in the rising sap,

And Christ will be the green leaves that will come

At Easter from the sealed and guarded tomb.”

MacCurtain was drawn towards the idea of the sun coming through a gap “because a gap between the fields in Ireland is usually a hostile gap”, and “you don’t go though gaps easily”.

MacCurtain was the nun coming through the gap when it came to the retrieval of the history of Irish women and wider questions of justice and equality, and it was a hostile gap from which she had to emerge.

That is why, as well as being full of humanity, and carrying an older, Celtic spirituality, she had to be tough and brave in order to open up what she described as “a locked room in the memory . . . the time comes when you have to take it out and honour it”; to go beyond a self-centred quest “for a meaning to ‘my’ life”. She was a champion of what became one of the most important aspects of the women’s liberation movement: personal testimony born of personal experience; and, as she recognised, “there was no break in the development of Irish feminism”.

I thought of all these things as Lyra McKee was laid to rest after that extraordinary funeral on Wednesday; the funeral of a gay woman, from a Catholic background in Belfast, who found a home, love and, ironically, a horrible death in the Derry cauldron as a ceasefire baby, after which the failed politicians were shamed into standing exposed.

Margaret MacCurtain campaigned for an Ireland in which McKee could find solace and purpose. MacCurtain championed what she called “that larger dimension of history, that seeks to reconcile and synthesise the past, rather than divide people into camps and set antitheses between ethnic groups and religious sects”.

McKee had to emerge from a hostile gap to do that too; real leaders lead when they emerge from that gap, despite the vicious snipers who stand in their way.