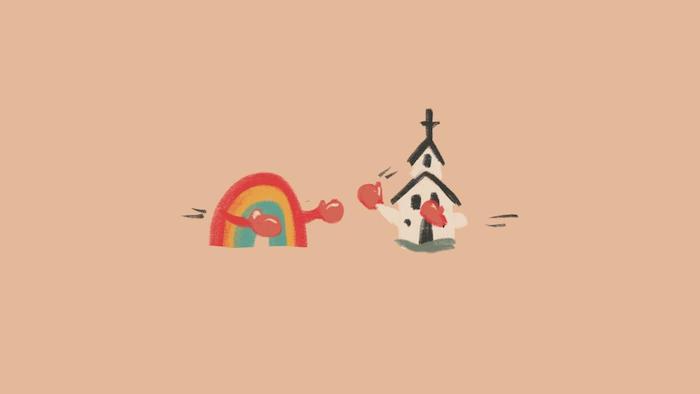 The paradoxical reality of the American Catholic Church is that it is has gay priests, gay followers, and followers in support of same-sex marriage,yet it continues to teach that homosexual behavior, same-sex marriage, and civil unions are sins against God’s plan.

The queer and Catholic dilemma feels like a never-ending standstill between equality and Catholic law, and until the Church can offer more than kind words, it may always remain as such.

“What we have to create is a civil union law,” Francis said in the documentary according to the New York Times. “That way they are legally covered … They are children of God and have a right to a family. Nobody should be thrown out, or be made miserable because of it.”

The Pope’s comments contradict those of his predecessor, not to mention official Catholic doctrine, who referred to homosexuality as an “intrinsic moral evil.” In 2003, the Congregation of the Faith took a clear stance against same-sex marriage and civil unions.

“Homosexuality is a troubling moral and social phenomenon,” the Congregation stated. “There are absolutely no grounds for considering homosexual unions to be in any way similar or even remotely analogous to God’s plan for marriage and family. Under no circumstances can they be approved.”

The doctrine’s strong opposition to same-sex civil unions may have contributed to the Vatican’s original attempt to censor Pope Francis’ comment, which was recently revealed to have been cut from a 2019 interview with Televisa, only to resurface in the documentary. According to the New York Times, “Almost everyone involved declined to comment or evaded questions of how the footage emerged.” Clearly the Church feels these comments were something to hide.

Some members of the church have clarified the Pope’s commentary, arguing that the Pope was not actually voicing support for same-sex civil unions but simply reiterating that LGBTQIA+ people should be “loved, cherished, and respected in whatever way they live,” according to Fr. Marcin Szymanski, assistant director of the Newman Center, a Catholic ministry that serves the UW community.

“He is saying you should not disown, kick out, or disrespect any member of your family because of homosexual preference,” Szymanski said.

The confusion stems from nuances in translation from the interview, which was conducted in Spanish. The Pope used the phrase “convivencia civil,” which some have argued translates to “civil coexistence,” not civil union.

“The Pope was clearly speaking in favor of civil unions,” Gómez-Bravo said. “The second half of his statement erases any ambiguity.”

Despite confusion around the Pope’s verbiage, his comments were highly encouraging to an anonymous UW student who is bisexual and Catholic.

“I would like to hear more on what he has to say from an official standpoint but as it is, it’s a hint to something that is really positive for me,” the student said.

But for many LGBTQIA+ people, myself included, this doesn’t exactly feel like a major step forward. Rather, it feels like an empty declaration disguising the Church’s inaction on LGBTQIA+ issues.

Even if the Pope is in favor of same-sex civil unions, this legal separation is still unequal treatment. A civil union is a legally recognized partnership created to preserve the iron-clad walls around the institution of marriage, ensuring that same-sex couples remain excluded from the right to marry. A rose by any other name does not smell as sweet, and with U.S. Christianity in rapid decline (while the number of religiously unaffiliated U.S. adults is rising), it seems the Church is paying the price for it.

The Catholic Church exists in contradiction when it comes to the LGBTQIA+ community. The same document that claims that “homosexual inclination is ‘objectively disordered’” also claims that LGBTQIA+ people “must be accepted with respect, compassion and sensitivity,” and “unjust discrimination in their regard should be avoided.”

We tend to think of Catholicism as a solidified entity that derives its power from its permanence. But the reality is that the Church has reversed its ideology a handful of times throughout history, changing its mind on Jews, usury, and slavery, to name a few.

A full-hearted acceptance of same-sex couples is long overdue, and yet it comes at a cost the Church can’t seem to pay. This change would require a radical rewrite of some of the Church’s essential teachings, rooted in Catholic beliefs that marital and sexual relationships must be procreative. This reasoning makes it nearly “impossible” for the Church to ever change their position on same-sex relationships, according to Fr. Syzmanski.

The Bible tells us that faith without action is dead. There’s a hidden repercussion in the Pope’s words: By appearing in favor of same-sex relationships, the Church saves itself from having to address its own hypocrisy and homophobia.

We need something the Church can’t offer: change, now.