I am a Roman Catholic woman, married with three teenage children. My roots in the United Church of Christ gave me a strong foundation of Christian beliefs and practices. With this background, one would not expect that I am on a path to being ordained a Roman Catholic priest. I was the last to know that this was possible, and that God would call me to this vocation. 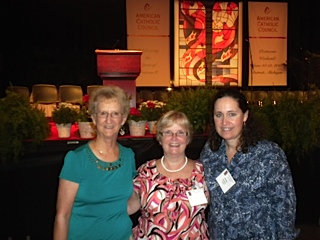 As a young Protestant girl, I remember asking a Catholic neighbor what a nun was. “She is someone who gives her life to God,” she answered.

Moved by her response, I wanted to know if I could become a nun. Her answer disappointed me, yet the idea of giving my life to God never left me.
Years later, I became Catholic when I discovered how much I loved the liturgy and the opportunity to receive communion every day. I called myself a Vatican II Catholic, and I struggled with those who thought the pre-Vatican II church superior.

Sometimes my Protestant roots would surface when I encountered the hierarchy’s abuse of authority. Resonating with Martin Luther, I found myself speaking out and trying to right the wrongs I saw happening in this church that I loved.
I graduated from Lexington Theological Seminary in 2009.In July 2010, the Vatican issued a document about pedophile priests. In the very last paragraph, ordaining women was compared to the criminal act of pedophilia and both were called “grave offenses against the faith.”

I could not believe what I read. How could ordaining women called by God to priesthood be compared to pedophilia, which caused immeasurable suffering to innocent children?

As I reflected on the male hierarchy’s attack against women, I was in a crisis. My experience had led me to hear God’s call to ministry as a hospice chaplain. Should I become an Episcopalian?

Running away was not the answer. I knew I needed to stay and work for reform.
I talked with a friend who is an Anglican priest about my struggle. I told her that deacons in the Roman Catholic Church should be allowed to administer the sacrament of Anointing the Sick. In the midst of this conversation she said, “It sounds like God is calling you to be a deacon.”

Hearing those words, I realized that I could no longer deny the truth of God’s call. I was in a religious culture whose idolatry of maleness oppressed women and denied their call from God.

Today, I will be ordained a deacon by Bishop Bridget Mary Meehan of the Association of Roman Catholic Women Priests. Next spring, I will become what God has always intended for me: a priest.

It’s humbling and empowering to be part of a prophetic movement that is transforming the Roman Catholic Church. My joy is full of the freedom that perhaps Rosa Parks felt in standing up against racism. Our brothers at the Vatican will say that this action excommunicates me, but I share this status with a long list of saints.