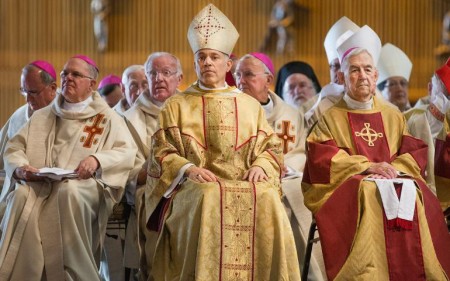 A Christian college in Berrien Springs, Michigan is mired in controversy after administrators denied a request from a campus group to hold a bake sale for homeless LGBT youth, spurring students to turn their frustration into opportunity and raise thousands online instead.

The controversy began last September at Andrews University, a 3,500-student school affiliated with the Seventh-day Adventist tradition, a conservative-leaning mainline Christian denomination. About midway through Fall semester, Aull4One, an unofficial pro-LGBT campus group that claims around 80 members, asked the administration if they could hold a bake sale to raise money for Project Fierce, an organization dedicated to assisting homeless LGBT youth. LGBT youth are disproportionately impacted by homelessness, often fleeing or being kicked out of homes where parents or guardians hold anti-gay religious beliefs.

But after six months of negotiations to get the event approved, Eliel Cruz, a co-founder and former president of Aull4One who identifies as both Christian and LGBT, received an email from school administrators denying the group’s request. Officials argued that donating to Project Fierce would “conflict with the missions of Andrews University,” primarily because the school is beholden to the views of the Seventh-day Adventist church, which is officially “opposed to homosexual practices and relationships.”

Administrators suggested students donate instead to Night Ministry, a nonprofit that serves a wide variety of Chicago’s homeless. But Eliel and the rest of Aull4One pushed back, noting that the ministry is not tailored to the specific needs of LGBT youth, and that using it would take the focus away from the unique struggles of LGBT people. (It is also unclear whether the administration was aware that Night Ministry regularly partners with Project Fierce.)

Aull4One suggested another organization that specifically targets LGBT youth, but the administration rejected that recommendation as well. Frustrated by months of effort, the students finally decided to take matters into their own hands: last week, the group launched its own online fundraiser for Project Fierce, saying the school’s repeated rebukes were “unethical and not at all Christ-like.”

The students were optimistic about the campaign, but say they were unprepared for what happened next: news of the campus controversy began to spread, with hundreds sharing their story on social media, funneling more and more visitors to the fundraising website. At present, the campaign has already raised almost $7,000 —“way more” than the group would have made on the original bake sale, according to Cruz.

But while the Internet’s compassionate response to the controversy is heartening to Cruz and other pro-LGBT students at Andrews, the college senior said many of his classmates remain “disappointed [and] upset” at their college’s leadership, in part because the issue of LGBT homelessness hits so close to home.

The university has since issued a statement insisting they are not opposed to helping LGBT youth per se, but rather take issue with organizations that “advocate behaviors contrary to Adventist beliefs.” But members of AULL4One are unconvinced; in a statement posted on the group’s Facebook page, leaders argued the school’s refusal to allow the bake sale flies in the face of the very faith they claim to uphold.

“While Andrews University has every right to deny any event on its campus, we believe this refusal is contradictory to Jesus’ repeated calls to help those in need,” the statement read.

Jonathan Doram, current president of AULL4One, echoed this frustration in a blog post written by Cruz for the Religion News Service.

“What bothers me is the placement of policy over actual human lives,” Doram said. “If Andrews University was truly intentional about helping LGBT homeless youth, the fundraiser would have started months ago.”

Cruz said talks are ongoing with the administration, but it remains unclear what the resolution will be. In the meantime, however, the students remain resolute in their defense of LGBT rights, but have opted for a Christ-like stance moving forward.

File under: What this guy doesn’t know about sex is a lot!

Bishop of Elphin Kevin Doran believes some people may have a genetic disposition towards being gay and admitted that he was confused about his sexuality as a teenager.

In a wide-ranging radio interview on Newstalk Breakfast he also implored women who had been raped to avoid having abortions as a way to “get back” at their attacker.

“Some people perhaps have a predisposition genetically to being gay; perhaps in some cases people are gay because of contexts, circumstances related to their own experience of life as young people.

“One of the things I would suggest also from my own experience working as a university chaplain would be that many young people in their late teens are confused about their sexuality, understandably I think. I’d have to say I was myself,” said the cleric, who is one of the leading advocates for a No vote in the upcoming same-sex marriage referendum.

Bishop Doran said that the use of the title “marriage equality” for the May vote is misleading, before adding that parents are not really parents despite being entrusted with the care of children.

“The whole relationship between life-giving and parenthood is being separated . . . Children lose the right to have a relationship with their parents,” he said.

Responding to Bishop Doran’s comments, Michael Rose from the Campaign for Civil Marriage Equality said such views are “unfortunate”, and reiterated his organisation’s belief that civil marriage and religious marriage are two distinct entities.

On the topic of fatal foetal abnormalities, Bishop Doran said that terminations serve only to devalue human life and should not be looked upon as a viable solution to dealing with such situations.

“Objectively speaking, to kill another human being is always sinful . . . The child is still a human being, you don’t destroy a life in order to get back at the mother’s rapist,” he said of cases involving non-consensual sexual assault.