I wrote about this very thing in Part 4 of my five-part series on Catholic Moral Theology. Look for it —> Seismic Shift.

The Pope has signalled a historic shift in the position of the Roman Catholic Church by saying condoms can be morally justified. 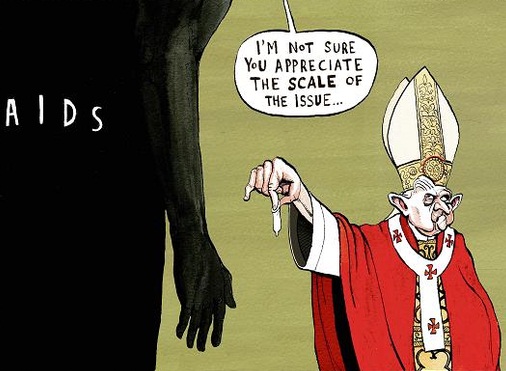 After decades of fierce opposition to the use of all contraception, the Pontiff has ended the Church’s absolute ban on the use of condoms.

He said it was acceptable to use a prophylactic when the sole intention was to “reduce the risk of infection” from Aids.

While he restated the Catholic Church’s staunch objections to contraception because it believes that it interferes with the creation of life, he argued that using a condom to preserve life and avoid death could be a responsible act – even outside marriage.

Asked whether “the Catholic Church is not fundamentally against the use of condoms,” he replied: “It of course does not see it as a real and moral solution. In certain cases, where the intention is to reduce the risk of infection, it can nevertheless be a first step on the way to another, more humane sexuality.”

He stressed that abstinence was the best policy in fighting the disease but in some circumstances it was better for a condom to be used if it protected human life.

“There may be justified individual cases, for example when a male prostitute uses a condom, where this can be … a first bit of responsibility, to redevelop the understanding that not everything is permitted and that one may not do everything one wishes.

“But it is not the proper way to deal with the horror of HIV infection.”

The announcement is in a book to be published by the Vatican this week based on the first face-to-face interview given by a pope.

In the interview, he admits he was stunned by the sex abuse scandal that has engulfed the Catholic Church and raises the possibility of the circumstances under which he would consider resigning. The 83-year-old Pontiff says in passages published exclusively in The Sunday Telegraph today that he is aware his “forces are diminishing”.

However, he appears determined to fight for the place of faith in the public domain.

His language in attacking the use of recreational drugs in the West and its impact on the rest of the world is particularly striking.

He describes drug trafficking as an “evil monster” that stems from the “boredom and the false freedom of the Western world”. Most significant, however, are his comments on condoms, which represent the first official relaxation in the Church’s attitude on the issue after rising calls for the Vatican to adopt a more practical approach to stopping the spread of HIV.

The Pope’s ruling is aimed specifically at stopping people infecting their partners, particularly in Africa where the disease is most prevalent.

However, it will inevitably be seized upon by liberal Catholics in Britain who oppose the Church’s stance against contraception.

High profile Catholics such as Cherie Blair have stated publicly that they use birth control.

The Pope’s comments are surprising because he caused controversy last year by suggesting that condom use could actually worsen the problem of Aids in Africa.

The Vatican amended an official version of the remarks to indicate that he said merely that condoms “risk” aggravating the problem.

However, there have been growing calls for the Church to clarify its position.

Theologians suggest that condoms are not a contraceptive if they are intended to prevent death rather than avoid life.

The Pope’s comments in the book, Light of the World, are likely to be welcomed by Catholic leaders in the West who have struggled to explain its current teaching.

Asked last year whether a married Catholic couple should use condoms where one of them had Aids, Archbishop Vincent Nichols, head of the Church in England and Wales, disclosed the confusion over the issue. “Obviously that’s a sensitive point and obviously there are different views on that,” he said.

Hardline Catholics are likely to be surprised and dismayed by the Pope’s comments as they argue that condoms can be used only as contraceptives.

There has been great anticipation before the book’s release, heightened by its author, Peter Seewald, who said in a teasing comment that it could be “a big sensation”.

The Pope gives his most personal account of the distress caused to him by the clerical sex abuse scandal, with particular reference to Germany and Ireland.

He says: “It was really almost like the crater of a volcano, out of which suddenly a tremendous cloud of filth came, darkening and soiling everything, so that above all the priesthood suddenly seemed to be a place of shame and every priest was under the suspicion of being one like that too.” He did not consider resigning over the crisis but does raise the possibility of a pope resigning if he were to lose his mental capacities.

“If a Pope clearly realises that he is no longer phys-ically, psychologically, and spiritually capable of handling the duties of his office, then he has a right and, under some circumstances, also an obligation to resign.” He tells of the last time he saw Pope John Paul II, his predecessor; talks of his reluctance to be Pontiff; and speaks of his increasing frailty.

“I had been so sure that this office was not my calling, but that God would now grant me some peace and quiet after strenuous years,” he says. While the Pope stresses the importance of dialogue with Islam, he nevertheless says the religion needs to “clarify … its relation to violence” and suggests it can be intolerant.

The Pontiff is highly critical of the “craving for happiness” in the West.

“I believe we do not always have an adequate idea of the power of this serpent of drug trafficking and consumption that spans the globe,” he says.

“It destroys youth, it destroys families, it leads to violence and endangers the future of entire nations.

“This, too, is one of the terrible responsibilities of the West: that it uses drugs and that it thereby creates countries that have to supply it, which in the end exhausts and destroys them.”

He continues: “A craving for happiness has developed that cannot content itself with things as they are.”

Talking about sex tourism, he says: “The destructive processes at work in that are extraordinary and are born from the arrogance and the boredom and the false freedom of the Western world.”