An now for a spot of news that highlights the true spirit of Christmas.

A Christmas cleaning of the Church of the Nativity turned into scuffles on Wednesday between rival Christian clerics zealously guarding denominational turf at the holy site. 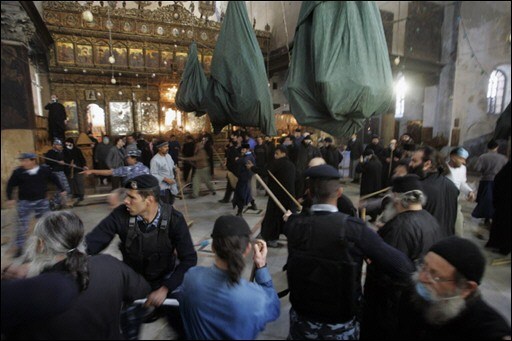 Brooms and fists flew inside the church marking the birthplace of Jesus as some 100 priests and monks of the Greek Orthodox and Armenian Apostolic churches brawled.

Palestinian police, bending their heads to squeeze through the church’s low “door of humility,” rushed in with batons flailing to restore order.

“It was a trivial problem that … occurs every year,” said police Lieutenant-Colonel Khaled al-Tamimi. “Everything is all right and things have returned to normal,” he said. “No one was arrested because all those involved were men of God.”

Administration of the 6th century Bethlehem church, the oldest in the Holy Land, is shared by Roman Catholic, Greek Orthodox and Armenian clerics.

Any perceived encroachment of jurisdictional boundaries within the church can set off a row, especially during the annual cleaning for Orthodox Christmas celebrations, which will be held next week.