In 1993, a brilliant idea to streamline churchgoing for professionals made its international debut at Italy’s church supplies expo: a confession box to which your sins could be faxed. “A space-age telephone booth,” one reverend raged to the Catholic Herald. “Will sinners be skulking around the office fax machine waiting for a private moment to confax?” Chicago Tribune columnist Mary Schmich wondered.

Now approaching its 17th iteration, the Koine expo in Vicenza, Italy, continues to unveil innovative products but also bread-and-butter items for churches like lighting systems and figurines. Last year, the fair hosted 13,000 visitors from all over the world who perused wares from 347 vendors. A new book, “Besides Faith,” by photographer Louis De Belle features vignettes of the expo.

This year’s fascinating items included glow-in-the-dark Jesus figures and electronic rosaries, according to De Belle. The rosary, he said, is a fascinating little pray-along device particularly useful for those with arthritis. It features a “spooky” chorus of praying nuns, an “Auto-Mystery” button that selects prayers and little yellow LEDs that light up. “I eventually developed a much more ‘show-business’ opinion of religion,” De Belle said about attending the expo.

Coming up with new tools for engagement is serious business for churches, which are facing sliding attendance rates with each generation. Fifty-one percent of the oldest living generation, the “Greatest Generation,” attends religious services at least once a week, while the same is true for only 37 percent of baby boomers, and just 27 percent of millenials, according to a 2014 Pew Research Center study. 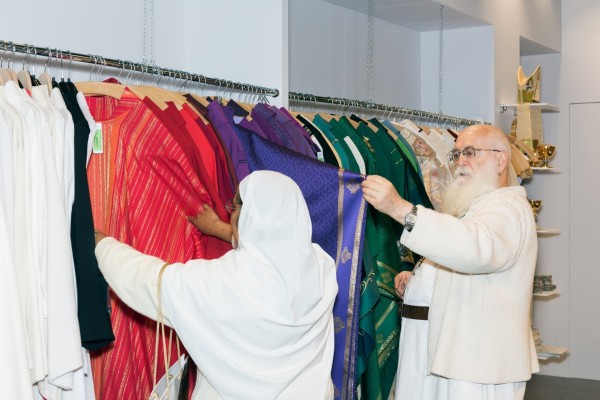 That explains why pastor Bil Cornelius announced he was giving out door prizes like flat-screen TVs, lightly used cars and skateboards at Easter services at Texas church Bay Area Fellowship in 2010. The service drew 23,500 people, and a handful of protesters, according to the Corpus Christi Caller Times. “I’ve never had so much fun in church,” the winner of a Volkswagen Jetta told the newspaper (because of the services, not the prize, she said).

Churches have had success with injecting a little fun into traditions that can come off as archaic. Priests and the faithful now take Ash Wednesday as an opportunity to post an #ashtag — a selfie taken after getting the cross smudged on your forehead. The pope too, is an avid tweeter, sending thanks and asking for prayers on Twitter just a few days after his selection. But even though Pope Francis has called the Internet “a gift from God,” a small percentage of pastors still think the Internet is a passing fad, according to a 2014 Barna Group survey of Protestant church leaders.

So for some clergy, Koine expo is a starting place for much needed updates. One attendee, Father Pasquale, was sent by the parishes in Calabria, Italy, which had pooled money to for him to attend, according to the BBC. “This is our version of haute couture,” he said. He rushed around the fair, perusing the latest fashions and expressing skepticism about electronic candles, before returning to his church by train to report what he had found.