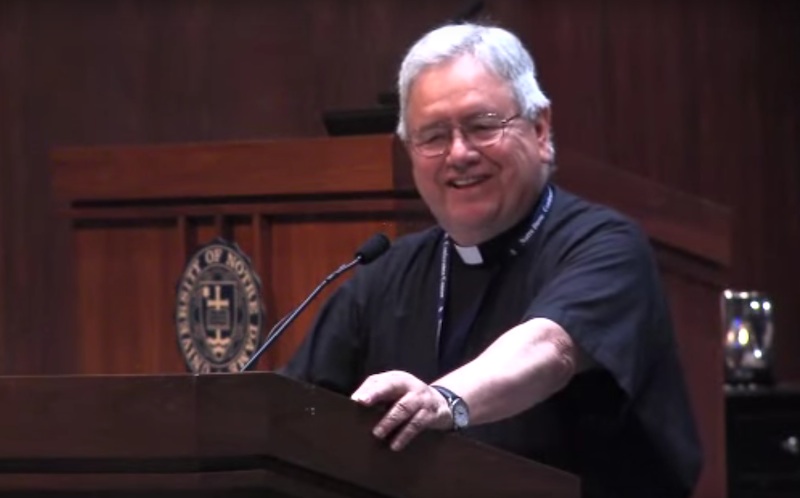 Fr. Virgilio Elizondo, one of San Antonio’s most accomplished and beloved Catholic priests whose work brought him recognition in Latin America and Europe and an esteemed faculty position at the University of Notre Dame, reportedly died of a self-inflicted gunshot at his home Monday afternoon, according to sources in the Catholic community.

Friends spoke of being devastated and in disbelief as the news made its way through Elizondo’s large circle in the city. Elizondo, 80, a Westside native and the son of Mexican immigrants, became a beacon for Catholics and non-Catholics inspired by his deep appreciation of mestizo history, culture and spirituality. His own roots gave him a grounded understanding as a theologian of what the poor and oppressed throughout Latin America were experiencing under the rule and repression of  military dictatorships in the 1960s, 70s and 80s. For Elizondo, liberation theology that swept the continent in those decades was one and the same with his mestizo-rooted theology.

I first met Elizondo in El Salvador while living there during the civil war years. We later became friends when my family moved to San Antonio in 1989. Kenneth Woodward, the longtime religion editor at Newsweek and author of numerous books on Catholicism and faith, told me at the time that Elizondo was one of the most remarkable priests he knew and that I should do whatever it took to get to know him once I arrived in San Antonio.

“Yes, Virgil Elizondo was an important theologian, but he was much more than that: He was a great priest,” Woodward said Monday evening. “Virgil was the face of the Church, and therefore of Christ, to literally thousands, in San Antonio and around the world. Tonight, the whole Catholic world weeps.”

Woodward, a Notre dame graduate, was a friend of Elizondo and Fr. Theodore Hesburgh, who served as president of Notre Dame from 1952-1987. He said it was a world that welcomed Elizondo. Despite his own humble beginnings, Elizondo learned to speak multiple languages and lectured widely on three continents. He authored numerous books, including “The Future is Mestizo” in 1992; “Guadalupe: Mother of the New Creation” in 1997; and “Galilean Journey: The Mexican American Promise” in 2000. His books remain in print, often assigned by theology professors at other major universities.

One of Elizondo’s proudest moments was being named a professor of pastoral and Hispanic theology at Notre Dame, the citadel of Catholic education, and a fellow at the university’s Institute of Latino Studies.  In 1997, he received the Laetare Medal, the highest honor conveyed by Notre Dame.

Elizondo downplayed his own many accomplishments, and few outside the archdiocese or his circle of friends knew that after receiving his undergraduate degree in chemistry from St. Mary’s University in 1957, he went on to earn a graduate degree in pastoral studies from Ateneo University in Manila in 1969, and his Ph.D in theological studies from the Institut Catholique in Paris in 1978. He was the recipient of numerous honorary degrees from around the world.

He served as rector of San Fernando Cathedral in the late 1980s and early 1990s and was credited with resurrecting the parish community there. His understanding of the power of media led him to do extensive work with the archdiocese’s television station, and his Spanish-language Mass at San Fernando was broadcast each Sunday to more than one million people throughout Latin America. He was a co-founder with then-Archbishop Patrick Flores of the Mexican American Cultural Center in San Antonio and a strong advocate for the city and region’s working poor. He was fond of telling stories about his own happy childhood and close-knit family, poor in material goods, rich in spirit and faith.

Elizondo was named secondarily in a May 2015 lawsuit filed by a John Doe in Bexar County that accused Jesus Armando Dominguez, then a student at Assumption Seminary here, of sexually molesting him from 1980-83 while the boy lived at a local orphanage and was mentored by Dominguez. In the lawsuit, the John Doe claims he approached Elizondo to report the molestation, only to be kissed and fondled by him while the two were in a vehicle together. Elizondo vigorously denied the charges in a public statement and in conversations with friends, and said he was prepared to fight the allegation legally.

Dominguez, who was later ordained in San Bernardino Diocese in California, disappeared in 2005 amid criminal charges of sexually molesting a number of boys. He reportedly fled to Mexico and was never arrested. He was defrocked as a priest and the diocese settled numerous lawsuits out of court for substantial cash payments, admitting that Dominguez had molested numerous boys.

Until the 2015 lawsuit, no such charges were ever leveled against Elizondo over his long and distinguished career as a writer, academic and parish priest. No other charges subsequently surfaced, either, but in the aftermath of widespread media reports of the Catholic Church and its failure over many decades to address the issue of priests who were sexual predators, a story first told in-depth by the Boston Globe and later memorialized in the Oscar-winning film “Spotlight,” the allegation against Elizondo took its toll. The affable, gregarious San Antonio native largely withdrew from public life here after the lawsuit was filed.

Shortly after midnight, the archdiocese released this statement from Archbishop Gustavo García-Siller:

“I join the priests of the Archdiocese of San Antonio as we are deeply saddened and stunned by the news of the death of Father Virgilio Elizondo on March 14. This is an occasion for great sorrow, as his death was sudden and unexpected.

“Father Virgil had served as rector of San Fernando Cathedral, and pursued scholarly work in Latino theology, evangelization, faith and spirituality, and culture. He had also been a long-time theology professor at the University of Notre Dame, and was the author of several books.

“At this devastatingly sad time for Father Virgil’s family – especially his sister – as well as his brother clergy, co-workers and friends, we offer our most profound sympathies. Our thoughts and prayers are with them all. I pray for all those who mourn Father Virgil and for the repose of his soul. In this Year of Mercy, we now commend him to the saving mercy of our God, who is compassionate and full of mercy and love. This is most fitting and proper.

“Eternal rest, grant unto him O Lord and let perpetual light shine upon him. May he rest in peace. Amen.”

Funeral arrangements will be announced soon, according to the statement.