The elevation of Greg Epstein, author of “Good Without God,” reflects a broader trend of young people who increasingly identify as spiritual but religiously nonaffiliated.

The Puritan colonists who settled in New England in the 1630s had a nagging concern about the churches they were building: How would they ensure that the clergymen would be literate? Their answer was Harvard University, a school that was established to educate the ministry and adopted the motto “Truth for Christ and the Church.” It was named after a pastor, John Harvard, and it would be more than 70 years before the school had a president who was not a clergyman.

Nearly four centuries later, Harvard’s organization of chaplains has elected as its next president an atheist named Greg Epstein, who takes on the job this week.

Mr. Epstein, 44, author of the book “Good Without God,” is a seemingly unusual choice for the role. He will coordinate the activities of more than 40 university chaplains, who lead the Christian, Jewish, Hindu, Buddhist and other religious communities on campus. Yet many Harvard students — some raised in families of faith, others never quite certain how to label their religious identities — attest to the influence that Mr. Epstein has had on their spiritual lives.

“There is a rising group of people who no longer identify with any religious tradition but still experience a real need for conversation and support around what it means to be a good human and live an ethical life,” said Mr. Epstein, who was raised in a Jewish household and has been Harvard’s humanist chaplain since 2005, teaching students about the progressive movement that centers people’s relationships with one another instead of with God.

To Mr. Epstein’s fellow campus chaplains, at least, the notion of being led by an atheist is not as counterintuitive as it might sound; his election was unanimous.

“Maybe in a more conservative university climate there might be a question like ‘What the heck are they doing at Harvard, having a humanist be the president of the chaplains?’” said Margit Hammerstrom, the Christian Science chaplain at Harvard. “But in this environment it works. Greg is known for wanting to keep lines of communication open between different faiths.”

The dozens of students whom Mr. Epstein mentors have found a source of meaning in the school’s organization of humanists, atheists and agnostics, reflecting a broader trend of young people across the United States who increasingly identify as spiritual but religiously nonaffiliated. That trend might be especially salient at Harvard; a Harvard Crimson survey of the class of 2019 found that those students were two times more likely to identify as atheist or agnostic than 18-year-olds in the general population.

“Greg’s leadership isn’t about theology,” said Charlotte Nickerson, 20, an electrical engineering student. “It’s about cooperation between people of different faiths and bringing together people who wouldn’t normally consider themselves religious.”

The Harvard chaplains play an outsize role on campus, touching hundreds of students’ lives whether through Mass offered by the Catholic Student Center or Shabbat dinners at Harvard Hillel. Its leader reports directly to the office of the university president.

To Mr. Epstein, becoming the organization’s head, especially as it gains more recognition from the university, comes as affirmation of a yearslong effort, started by his predecessor, to teach a campus with traditional religious roots about humanism.

“We don’t look to a god for answers,” Mr. Epstein said. “We are each other’s answers.”

Mr. Epstein’s work includes hosting dinners for undergraduates where conversation goes deep: Does God exist? What is the meaning of life? He previously ran a congregation of Boston-area humanists and atheists who met in Harvard Square for weekly services that centered on secular sermons. In 2018 he closed that down to focus his time on building campus relationships, including at M.I.T., where he is also a chaplain. Mr. Epstein frequently meets individually with students who are struggling with issues both personal and theological, counseling them on managing anxiety about summer jobs, family feuds, the pressures of social media and the turbulence endemic to college life.

“Greg is irreverent and good at diffusing pressure,” Ms. Nickerson said, recalling a time he joked that if her summer internship got too stressful she could always get fired — then she would have a good story to share. 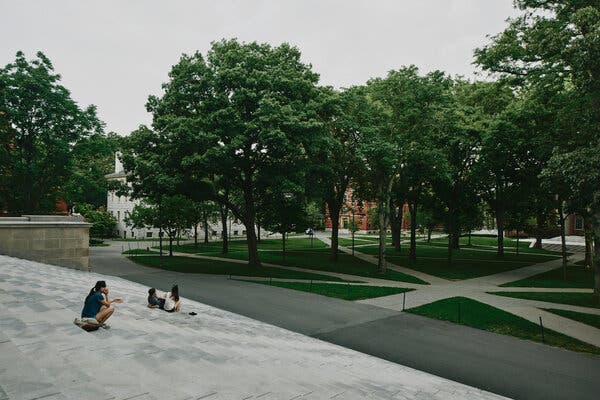 Some of the students drawn to Mr. Epstein’s secular community are religious refugees, people raised in observant households who arrive at college seeking spiritual meaning in a less rigid form.

Adelle Goldenberg, 22, grew up in the Hasidic community in Brooklyn, where she recalls being told that she could not attend college. In preschool, when asked what she wanted to be when she grew up, her answer was simple: a bride. It was the only thing she could envision for a girl like herself. When she turned 19, she applied to Harvard in secret and fled the community.

Once at Harvard, she was wary of assuming any religious label, but she still yearned to find people wrestling with issues deeper than academic achievement. She started attending meetings of the humanist group and discovered in Mr. Epstein a form of mentorship that felt almost like having a secular rabbi, she said.

“When the pandemic hit I was like, ‘Greg, do you have time to talk about the meaning of life,’” Ms. Goldenberg recalled. “He showed me that it’s possible to find community outside a traditional religious context, that you can have the value-add religion has provided for centuries, which is that it’s there when things seem chaotic.”

Ms. Goldenberg reflected anew on how unlikely her path had been when her mother asked to see the university yearbook: “I told her, ‘I don’t think you’re going to like it,’” Ms. Goldenberg said. “It says I was co-president of the Harvard Humanists, Atheists and Agnostics. And you can see my shoulders.”

Nonreligiosity is on the rise far beyond the confines of Harvard; it is the fastest growing religious preference in the country, according to the Pew Research Center. More than 20 percent of the country identifies as atheist, agnostic or nonreligious — called the “nones” — including four in 10 millennials.

The reasons that more young Americans are disaffiliating in the world’s most religious developed country are varied. The Notre Dame sociologist Christian Smith attributes the trend partly to the growing alliance between the Republican Party and the Christian right, a decline of trust in institutions, growing skepticism of religion in the wake of the Sept. 11 terrorist attacks and a shift away from traditional family structures that centered on churchgoing.

Mr. Epstein’s community has tapped into the growing desire for meaning without faith in God. “Being able to find values and rituals but not having to believe in magic, that’s a powerful thing,” said A.J. Kumar, who served as the president of a Harvard humanist graduate student group that Mr. Epstein advised.

Other Harvard chaplains have applauded Mr. Epstein’s efforts to provide a campus home for those who are religiously unattached, skeptical but still searching. Some said his selection to lead the group, following its previous Jewish leader, seemed obvious.

“Greg was the first choice of a committee that was made up of a Lutheran, a Christian Scientist, an evangelical Christian and a Bahá’í,” said the Rev. Kathleen Reed, a Lutheran chaplain who chaired the nominating committee. “We’re presenting to the university a vision of how the world could work when diverse traditions focus on how to be good humans and neighbors.”

And for some members of Harvard’s humanist and atheist community, exploring humanism has brought with it a richer understanding of faith.

Ms. Nickerson grew up in a working-class Catholic household where she struggled to connect with rituals like Mass. But during her freshman year at Harvard, she found herself capable of long, lively conversations with her devout grandmother. Ms. Nickerson realized that her involvement with Harvard humanism had given her the language to understand her grandmother’s theology.

Last spring, the two were tending roses and daylilies in the family garden when they got on the topic of surrender. Ms. Nickerson’s grandmother reflected on the aspects of her life that were in God’s hands; Ms. Nickerson agreed that it was important to recognize all the events beyond human control, though she does not believe there is a deity involved. Ms. Nickerson then shared a Buddhist parable that she had learned from the humanist club, which her grandmother later passed on to her Bible study group.

“We understood the idea of surrender in a similar way even though one of those explanations came with God and the other didn’t,” Ms. Nickerson said. “I find I’m more fluid in my spiritual conversations now.”