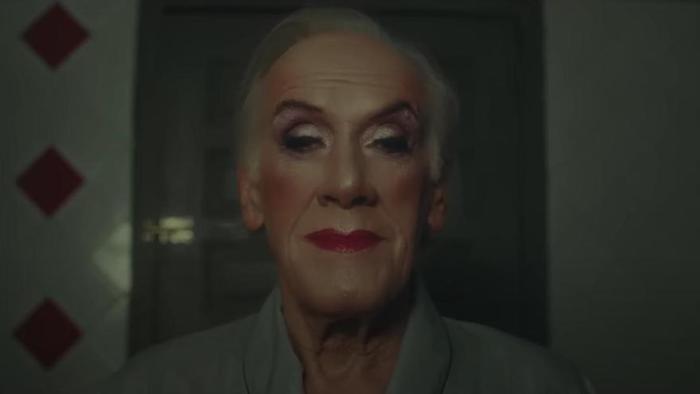 A hand that takes the lipstick in an oversight of its owner. The first make-up tests in front of the mirror, a trembling hand and a smear of lipstick on her mouth. Thus begins the announcement of a J&B advertising campaign that marks the beginning of the Christmas commercials. But neither the beginning, nor the end, resembles those we have seen before.

The protagonist is a grandfather who learns to put on makeup. He stares at the store owner who keeps an eye on him while she charges him for an eyeshadow set. He notices, but doesn’t care, when he is caught studying the makeup on a model’s face at the bus stop. At home, he cherishes the moments when he can learn to paint himself —and remove his make-up— in the bathroom, without his wife finding out.

The effect of seeing grandfather with clippings from magazines and catalogs to secretly learn to put on makeup has the initial sad tone of Christmas stories. The song ‘She’, by Elvis Costello, which gives the story its title, plays in the background. And like so many stories, it has a twist, but this one had not been told to us before in a Christmas campaign. We do not reveal it so that you can enjoy the end.

Lucas Paulino, founder and executive creative director of the agency responsible for the ad, El Ruso de Rocky, explains that his Christmas story takes over from last summer’s campaign, “Hay ganas de Orgullo de pueblo”, with which the brand supported the rights of the LGTBQ+ collective in rural areas. “We wanted to bring pride not to Madrid, but where it is needed, to the towns of Spain.” The creative manager affirms that once they knew the repercussion of the campaign, “we were clear that we had to continue”.

That “people’s pride” helped make visible “sexile”, the journey of LGTBQ+ people from towns to cities, driven by discrimination and lack of acceptance, and attracted by the possibility of living in freedom and being themselves. . With the Christmas story, J&B wants to contribute its grain of sand against “Christmas homosexuality”, the pain and isolation of those who feel that on these dates they cannot come to the family table to celebrate with their loved ones.

“We don’t want anyone to be left out of the celebration,” says Úrsula Mejia-Melgar, Marketing Director of Diageo (the company that owns J&B) for Southern Europe. After this summer’s campaign, the director assures that the brand discovered the importance of “celebrating the growth” of those who learn to understand people from the group in their family environment. “There is no more beautiful way to tell this reality than a Christmas story”, says Mejia-Melgar.

That Christmas story coincides, according to Diageo’s directive, with the principles of a brand that believes in “inclusion and diversity” and whose intention, he says, is “to promote moments of coexistence where everyone fits at the table.” But like any ad campaign planned months in advance, none anticipated the ad’s release to coincide with the political debate over transgender rights.

“We do not have a political agenda,” defends Mejia-Melgar, who prefers to speak of courage. “With any different announcement, that addresses topics that are not usually talked about, it is bravery.” Paulino adds that, even if they could have known that the announcement would coincide with this context, “we would have done the same.” The ad, he explains, was conceived “from respect and affection.” Like grandfather’s makeup practices for his granddaughter.