Over 100 Spanish organisations on Friday urged protesters to hit the streets of Madrid on the eve of Pope Benedict XVI’s arrival next week to demonstrate against the public cost of his visit. 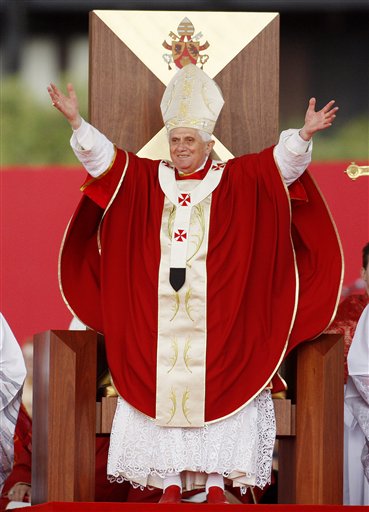 The organisations — a mix of groups representing gays and lesbians, feminists as well as leftist political parties — estimate thousands of people will take part in the march on Wednesday evening.

The pope will arrive in Madrid on Thursday to lead the last four days of the Roman Catholic Church’s six-day World Youth Day celebrations.

“We are completely in agreement that they come, but we don’t agree that a private event be financed with everyone’s money,” the president of Madrid Association of Freethinkers and Athiests, Luis Vega, told a news conference.

Church officials estimate over one million people will take part in the event, which includes religious processions, concerts, outdoor masses and cultural exhibits.

More than 10,000 police are on duty to avoid incidents during the event and public schools and gyms will house thousands of young people who will flock to Madrid for the festivities.

The Madrid metro is also offering pilgrims who come to the city for the event a heavily discounted weekly pass.

“We are not organizing an anti-pope protest, we are defending a secular state that does not use public money to benefit a few,” said Evaristo Villar, the spokesman for Redes Cristianas, an association that groups progressive Catholic organisations.

“The ostentatiousness of this event during such an enormous economic crisis, has no place in a society that has nearly five million unemployed and where so many people are going through tough times.”

Spain is struggling to recover from an 18-month recession that began in late 2008 and left it with a eurozone-high unemployment rate of just over 20 percent and a bloated deficit.

World Youth Day organisers say the event will cost just 50.5 million euros to stage, excluding security expenses, with the bill funded 80 percent by contributions and the rest covered by donations from corporations.

They argue the event will provide Spain with an economic boost of more than 100 million euros and help promote the country as a tourist destination.