Saints Sergius and Bacchus were Roman soldiers, Christian martyrs and gay men who loved each other. They were killed around 303 in present-day Syria. Their feast day is observed on Oct. 7. The couple was openly gay, but secretly Christian — the opposite of today’s closeted Christians. 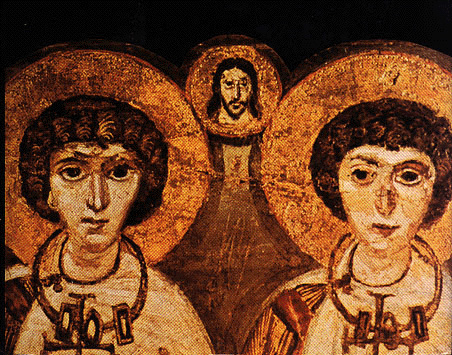 The close bond between the two men has been emphasized since the earliest accounts, and recent scholarship has revealed their homosexuality. The oldest record of their martyrdom describes them as erastai (Greek for “lovers”). Scholars believe that they may have been united in the rite of adelphopoiesis (brother-making), a kind of early Christian same-sex marriage.

A classic example of paired saints, Sergius and Bacchus were high-ranking young officers. Sergius was primicerius (commander) and Bacchus was secundarius (subaltern officer). They were tortured to death after they refused to attend sacrifices to Zeus, thus revealing their secret Christianity.

The men were arrested and paraded through the streets in women’s clothing in an unsuccessful effort to humiliate them. Early accounts say that they responded by chanting that they were dressed as brides of Christ. They told their captors that women’s dress never stopped women from worshipping Christ, so it wouldn’t stop them, either. Then Sergius and Bacchus were separated and beaten so severely that Bacchus died.

According to the early manuscripts, Bacchus appeared to Sergius that night with a face as radiant as an angel’s, dressed once again as a soldier. He urged Sergius not to give up because they would be reunited in heaven as lovers. His statement is unique in the history of martyrs. Usually the promised reward is union with God, not with a lover. Over the next days Sergius was tortured and eventually beheaded.

Sergius’ tomb became a famous shrine, and for nearly 1,000 years the couple was revered as the official patrons of the Byzantine army. Many early churches were named after Sergius, sometimes with Bacchus. They are recognized as martyrs by the Catholic, Eastern Orthodox and Oriental Orthodox churches. The pair was venerated through the Mediterranean, the Middle East, Latin America and among the Slavs. Sergius and Bacchus continue to be popular saints with Christian Arabs and now among GLBT Christians and their allies.

The icon above was painted by Brother Robert Lentz, a Franciscan friar and world-class iconographer known for his innovative icons. “Saints Sergius and Bacchus” is one of 10 Lentz icons that sparked a major controversy a few years ago.

Critics accused Lentz of glorifying sin and creating propaganda for a progressive sociopolitical agenda. They caused such a stir that in order to keep the peace between his Franciscan province and the Archbishop of Santa Fe, New Mexico, Lentz gave away the copyright for the 10 controversial images to his distributor, Trinity Stores. Lentz had his name removed from those images on the Trinity website, but later reclaimed authorship. All 10 were displayed there for a few years as a collection titled “Images That Challenge.” The group includes gay-positive, women-affirming and pagan-oriented icons. Lentz’ own moving spiritual journey and some of his icons are included in the book Art That Dares: Gay Jesus, Woman Christ, and More by Kittredge Cherry.

To learn more about Sergius and Bacchus, check out “Same-Sex Unions in Premodern Europe” by John Boswell and “Passionate Holiness” by Dennis O’Neill.