Germany’s top Roman Catholic has called for women to be allowed to become deacons, which would enable them to perform baptisms and marriages outside of mass – a novelty for Catholic women.

Archbishop of Freiburg Robert Zollitsch, who chairs the German Bishops’ Conference, called for the change at the end of a four-day meeting to discuss possible reforms. 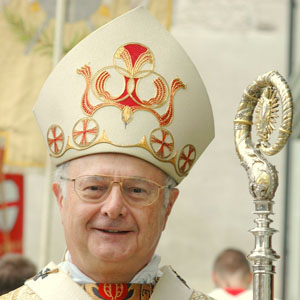 The conference, the first of its kind, invited 300 Roman Catholic experts to propose reforms. Zollitsch’s comments echo year-long calls from the Central Committee of German Catholics to permit women to become deacons. On Sunday, Zollitsch said that aim was no longer a ‘taboo.’

Zollitsch said the Catholic Church could only regain credibility and strength by committing to reform. He described an “atmosphere of openness and freedom” at the conference.

Deacons assist priests during church services and can perform baptisms and marriages outside of mass. Their primary role however is to serve the needy in their community and their duties are considered secular rather than pastoral.

Another proposal to emerge from the conference was to extend the rights of remarried divorcees to sit on church bodies such as parish councils. Conference members also discussed the possibility of granting them the right to receive Holy Communion and attend confession.

“It’s important to me that, without undermining the sanctity of marriage, these men and women are taken seriously within the church and feel respected and at home,” said Zollitsch. At present the reforms remain speculative and there is no proposed time-frame for their implementation. The position of divorcees remains highly controversial within the Church.

The conference also touched on the difficulty, particularly in eastern Germany, of recruiting people to work for Catholic institutions such as hospitals and kindergarten. At present the Church can only employ Roman Catholics. However Zollitsch called for work permits to be extended to non-Catholics and to those with “different lifestyles.” This would technically apply to homosexual people too. However Church labour reforms are unlikely to be introduced in the next three years.

While reform might be slow to come, the sentiments expressed at the conference are a signal to many that change is on the way. “I have never experienced a process of strategy development as transparent as this one,” said Thomas Berg, of the Baden-Württemberg Leadership Academy, who attended the conference.

One Reply to “Women Catholic deacons ‘no longer taboo’”