A “Jesus 2 dads” sign has rocked a Catholic Church in Buffalo, New York, after the Reverend, who had it placed on the church’s street sign, mistook it for a sign of encouragement to children from stepfamilies.

“Jesus had 2 dads, and he turned out just fine,” the sign read (see image below from Yahoo! Parenting.) 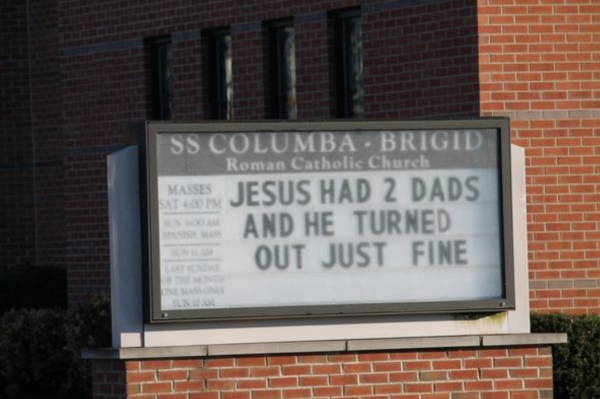 Reverend Roy Herberger of the St. Columba-Brigid Roman Catholic Church confessed to Yahoo! Parenting that he had no idea he was using a sign that in reality supports same-sex marriage.

The 73-year-old reverend said he got the “Jesus 2 dads” sign idea from a Google search for “funny street signs” and that, once he learned the true meaning, he could “see why people are upset.”

“I only had one purpose,” Herberger continued. “After 48 years in the church, I see so many kids with stepparents, or even in single-family homes or being raised by grandparents, who feel that they’re not as good as other kids who have a nuclear mother-and-father family. I’ve seen what that does sometimes when they’re comparing themselves to that nuclear family and I wanted to say, ‘Hang in there. You’re good. Things will work out for you.’ I wanted to provide support and understanding for kids in that situation.”

Herberger also insisted that he was not trying to cause problems, and that he had “no trouble” taking the sign down once it had come to his attention. 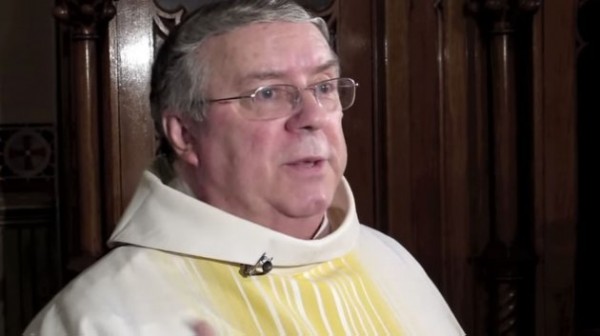 One look at the church’s guestbook page online, however, shows that some Christians aren’t so quick to forgive, and at least one doubts that Herberger is giving a truthful explanation behind his intent.

“That billboard was set up with both meanings in mind,” said a commenter going by the name of Jason, who added that it’s bad enough the Church “is attacked by the evil, secular gay mafia on a daily basis,” but that it’s even worse when there are “priests within the Catholic Church implicitly supporting it!”

“There is no room in the priesthood for anyone, including bishops, cardinals, and even the pope, that in any way support or promote sodomy,” Jason continued.

Some of his detractors have suggested that he may have known what he was doing, pointing to an emotional interview that Herberger shared over the closure of St. Ann’s church in Buffalo three years ago.

According to the YouTube video notes, Herberger spoke out against the sudden closure, claiming that the closure process “mistreats people.”

In 2011, the church appealed to the Vatican to avoid Kmiec’s decree that St. Ann merge with nearby St. Columba and Brigid Parish.

You can view the video below and decide for yourself whether this is the makings of a rogue parishioner.

On another note for Herberger, it appears that some of the more negative comments are starting to dissipate as supporters chime in, applauding him for his message of inclusion for any children, who come from less traditional households.

As for the origins of the “Jesus 2 dads” sign, the reference is that Jesus was the earthly son of Joseph, but that he was spiritually conceived in a virgin birth to Mother Mary, making God his true Father.

The “Jesus 2 dads” sign itself has origins within growing sects of Christianity that are opening up more to support of same-sex marriage.

If you search “Jesus 2 dads” on Google Image, you will find signs from more than one denomination — mainly Methodist and Anglican.

Catholicism has never been accepting of homosexuality, though, so it was quite the eye-opener when this message appeared in front of Herberger’s congregation.

What do you think of the “Jesus 2 dads” controversy, readers — justified or overblown? And did Herberger secretly know what he was doing? Sound off in the comments section.