As the Jubilee Year of Mercy is rapidly coming to a close, the pope reached out once again to those in need of mercy – men who have left the priesthood.

For two hours, Pope Francis met with seven men, who now have families, and spent time listening to their stories and getting to know their wives and children.

Pope Francis did not intend to judge or justify them, but desired to express his closeness to these men, who felt they had made a mistake by becoming a priest. Many faced extreme opposition from their diocese, family or friends for leaving. Because of this, the pope wanted to send a gentle message of mercy to the five Italians, Spaniard and Latin American men he met during the surprise encounter.

Additionally, the families asked him to autograph various objects, like this cell phone case and gave him gifts as well.

The pope ended the visit by reciting a Hail Mary with them all together and giving a group blessing.

When the pope headed outside to leave the apartments on the outskirts of Rome, however, he was greeted by masses of people who waited for him with cell phones posed and ready for pictures. 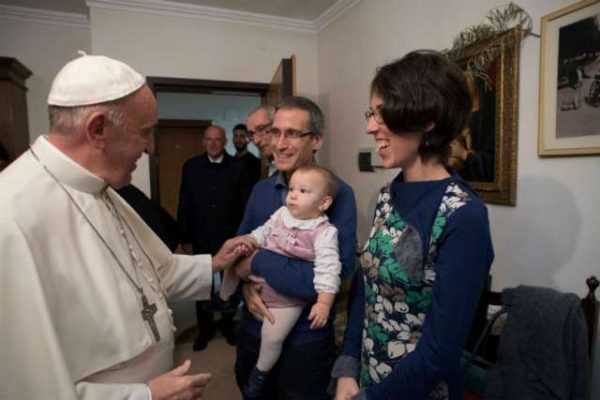