A warrant is out now for the arrest of Father Matthew Wydmanski, Pastor of Corpus Christi Catholic Church in Buffalo’s Broadway Market District. According to court documents, Wydmanski was arrested on August 6th. Police claim the priest was passed out drunk behind the wheel of his car in Black Rock. When officers tried to check on him, they say the priest stepped on the gas, and nearly striked two officers with his vehicle. Wydmanski was charged with of list of charges including DWI and 1st degree Reckless Endangerment and was scheduled to appear in Buffalo City Court last week for a preliminary felony hearing. 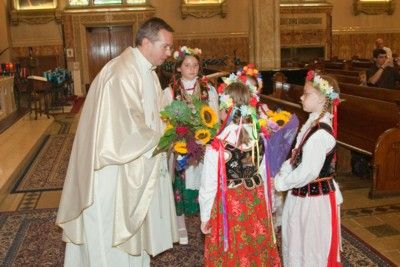 Father Wydmanski, who’s real name is Bodgan, came to Corpus Christi Church in 2008 and became the church pastor in 2010. He is not a diocesan priest, but part of the Pauline Fathers. Leaders say his actions were not condoned and Wydmanski did not have permission to leave the country. WKBW reached out to the Pauline Fathers, and they released this statement Friday afternoon.

“On August 6th, Fr. Matthew Wydmanski, O.S.P.P.E., Pastor of Corpus Christi Church, which is owned and staffed by the Pauline Fathers, was arrested by Buffalo Police for driving while intoxicated, reckless endangerment and reckless driving. He was arraigned in Buffalo City Court and plead not guilty. The case was scheduled for a preliminary hearing . Fr. Matthew did not show up for the preliminary hearing, and on August 11, he apparently left the country, flying from Toronto to his native Poland. Fr. Matthew is not a citizen of the United States. Fr. Matthew is a member of a religious order, and as such is under a vow of obedience to his superiors. Fr. Matthew did not have permission to leave the United States. As Provincial of the order, I did not give Fr. Matthew permission to leave, and I do not condone his actions. The Pauline Fathers consider it an honor to serve Corpus Christi Parish, and do not condone drunk-driving or fleeing to avoid prosecution.”