After months of legal review, the Department of Defense announced Friday that military chaplains may officiate in same-sex wedding ceremonies of service members in states where gay marriage is legal. Such ceremonies can be performed on military bases, officials wrote in a Friday memorandum. 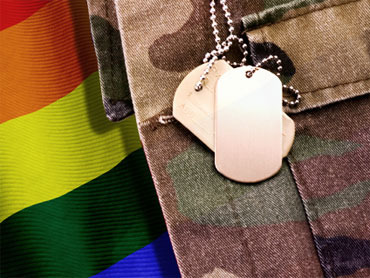 In connection with repeal of “don’t ask, don’t tell,” Under Secretary of Defense for Personnel and Readiness Clifford L. Stanley wrote in the DoD memo:

“A military chaplain may participate in or officiate any private ceremony, whether on or off a military installation, provided that the ceremony is not prohibited by applicable state and local law. Further, a chaplain is not required to participate in or officiate a private ceremony if doing so would be in variance with the tenets of his or her religion or personal beliefs. Finally, a military chaplain’s participation does not constitute an endorsement of the ceremony by DoD.”(A PDF of the memo is available HERE.)

Also released by the Pentagon Friday is a Sept. 21 facilities memo signed by DoD general counsel Jeh Johnson, who wrote that “military facilities for private functions, including religious and other ceremonies, should be made on a ‘sexual-orientation neutral’ basis, provided such use is not prohibited by applicable state and local laws.”

The guidance concurs with a previous decision by Navy Chief of Chaplains Rear Adm. Mark L. Tidd, who in April clarified upon the advice of legal counsel that individual chaplains would therefore be permitted — and expressly not obligated — to officiate weddings for gay and lesbian service members at base facilities in states that allow marriage for same-sex couples, Tidd wrote.

However, Tidd suspended his own guidance pending Pentagon legal review; social conservative groups and a group of 63 House Republicans had blasted his guidance, claiming it violated Section 3 of the Defense of Marriage Act.

The Pentagon guidance comes on the same day as the retirement of Chairman of the Joint Chiefs of Staff Adm. Mike Mullen, whose personal support for ending “don’t ask, don’t tell” gave a crucial boost to the repeal movement. Appearing before a Senate committee hearing in February 2010, Mullen testified that he was troubled by a policy that “forces young men and women to lie about who they are in order to defend their fellow citizens.”

Appearing in his final news conference last week with Secretary of Defense Leon Panetta, Mullen said of completed “don’t ask, don’t tell” repeal, “Today is really about every man and woman who serves this country, every man and woman in uniform, regardless of how they define themselves. And tomorrow, they’ll all get up, they’ll all go to work, and they’ll all be able to do that work honestly. And their fellow citizens will be safe from harm. And that’s all that really matters.”

“We are pleased the Department of Defense has made it clear that a military Chaplain is allowed to perform any lawful ceremony that is consistent with his or her beliefs and is not required to perform a ceremony that is inconsistent with those beliefs. We are also pleased that access to military facilities will be granted on a sexual-orientation-neutral basis. The guidance issued today strikes the right balance between respecting the faith traditions of chaplains and affording all service members the same rights under current law. This is another logical step in the direction of full equality for gay and lesbian service members, and we hope the Department will continue to move down that path.”

“Now that ‘Don’t Ask, Don’t Tell’ is gone, there is nothing prohibiting chaplains whose denominations do not discriminate from treating same-sex couples equally in accordance with state and local laws. There are many chaplains in the military who simply do not believe that gay and lesbian servicemembers are second-class citizens, and those chaplains should have the freeom to practice their religion as they see fit, including officiating at ceremonies that their denominations recognize.”