For TJ Williams, being Black, gay and heavily involved in the church is not a contradiction or an identity of great complexity.
Homophobes in the Black church, he said, “have forsaken the legacy of the Black Church” as a pillar of justice and social change. 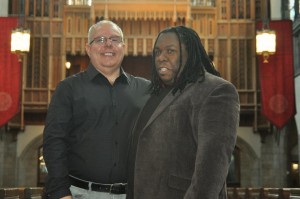 Williams is a student, a gay man and an organizer on a mission to amplify the voices of Black gay preachers who support LGBT equality, of which there are many, he said.

“I want folks in the African-American community inspired to understand that LGBT rights are civil rights,” Williams said.

At a time when some have equated Black churches with homophobia, especially in the wake of President Obama’s recent support of marriage equality, Williams is fighting to portray a different image of the Black and faithful.

Williams is a Master of Divinity student at New York Theological Seminary. He is also a member of the Riverside Church in New York City, a church that has been open and affirming towards LGBT people since 1985. Williams married his partner, Brad Williams Hauger, there last year.

Williams grew up in Youngstown, Ohio. His mother was an evangelist who equated LGBT rights with her own struggles as a woman early on.

“She saw this connection between sexism and misogyny and homophobia [in the church],” Williams said.

Williams’ upbringing and his own sense of justice led him to seek out a church that embraced LGBT people and continued to push for fairness. That church, for him, was Riverside.

Riverside has a legacy of social justice. Dr. Martin Luther King, Jr. gave his “Beyond Vietnam” speech there in 1967. Today, the church bills itself as open and affirming on its website, listing same-sex weddings alongside heterosexual ceremonies.

Riverside is not alone. Rev. Otis Moss III of Trinity United Church of Christ in Chicago (the church of Rev. Jeremiah Wright, President Obama’s controversial former pastor), made headlines recently by backing the president’s support for marriage equality and calling on other Black churches to do the same.

“The institution of marriage is not under attack as a result of the President’s words,” Moss wrote. “Marriage was under attack years ago by men who viewed women as property and children as trophies of sexual prowess. Marriage is under attack by low wages, high incarceration, unfair tax policy, unemployment, and lack of education.” [Windy City Times attempted to contact Moss on numerous occasions. However, he had not responded as of the press deadline.]

Other Black churches have added their voices to a growing chorus of those who support marriage equality. But for those not ready to go public with their support for LGBT causes, said Williams, Black churches are increasingly lending support to LGBT movements in a quieter way: they’re backing President Obama on other issues at a time when his leadership has been called into question.

Williams argues that the media has largely portrayed Black churches as monolithic, interviewing homophobic Black ministers but not ones that embrace LGBT people.

“I often ask myself why the media is missing this,” he said. “If you’re going to give press to these homophobic ministers, then call up these clergy that are well-studied and believe in justice for all.”

Williams is taking matters into his own hands. He is planning a large press conference at June 7 that highlights the voices of Black clergy who support President Obama’s stance on marriage equality. The details of that event have not yet been announced.

Williams believes that Black churches, built on a foundation of equality and justice, should naturally step up to support LGBT rights.

“We find it very foreign when we come across folks that don’t understand that civil-rights narrative,” Williams said. “The legacy was always about justice.”