This man couldn’t tell the truth if his life depended upon it!

Cardinal Timothy M. Dolan of New York authorized payments of as much as $20,000 to sexually abusive priests as an incentive for them to agree to dismissal from the priesthood when he was the archbishop of Milwaukee. 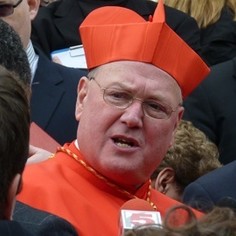 Questioned at the time about the news that one particularly notorious pedophile cleric had been given a “payoff” to leave the priesthood, Cardinal Dolan, then the archbishop, responded that such an inference was “false, preposterous and unjust.”

But a document unearthed during bankruptcy proceedings for the Archdiocese of Milwaukee and made public by victims’ advocates reveals that the archdiocese did make such payments to multiple accused priests to encourage them to seek dismissal, thereby allowing the church to remove them from the payroll.

A spokesman for the archdiocese confirmed on Wednesday that payments of as much as $20,000 were made to “a handful” of accused priests “as a motivation” not to contest being defrocked. The process, known as “laicization,” is a formal church juridical procedure that requires Vatican approval, and can take far longer if the priest objects.

“It was a way to provide an incentive to go the voluntary route and make it happen quickly, and ultimately cost less,” said Jerry Topczewski, the spokesman for the archdiocese. “Their cooperation made the process a lot more expeditious.”

Cardinal Dolan, who is president of the national bishops’ conference and fast becoming the nation’s most high-profile Roman Catholic cleric, did not respond to several requests for comment.

A victims advocacy group, the Survivors Network of those Abused by Priests, sent a letter of protest to the current archbishop of Milwaukee on Wednesday asking, “In what other occupation, especially one working with families and operating schools and youth programs, is an employee given a cash bonus for raping and sexually assaulting children?”

Experts in the Catholic Church’s response to sexual abuse say that payouts to dismissed priests are not uncommon. When a man becomes a priest, the church is expected to care for his needs for a lifetime.

The newly revealed document is the minutes of a meeting of the finance council of the Milwaukee archdiocese from March 7, 2003, which Cardinal Dolan attended. The archdiocese was facing a flood of potential lawsuits by people claiming abuse, and the church’s insurance company was refusing to cover the costs because it said the church had been negligent. The minutes noted that “unassignable priests” — those suspected of abuse — were still receiving full salaries.

The minutes say that those at the meeting discussed a proposal to “offer $20,000 for laicization ($10,000 at the start and $10,000 at the completion the process).” Instead of salary, they would receive a $1,250 monthly pension benefit, and, until they found another job, health insurance.

The first known payment in Milwaukee was to Franklyn Becker, a former priest with many victims. Cardinal Dolan said in response to a reporter’s question at the time that the payment was “an act of charity,” so that Mr. Becker could pay for health insurance.

According to church documents, Mr. Becker was accused of abusing at least 10 minors, and given a diagnosis of pedophilia in 1983. The church paid more than $16 million to settle lawsuits involving him and one other priest.

The Milwaukee Archdiocese filed for bankruptcy in January 2011, in the face of potential lawsuits by 23 accusers.