Some had waited decades for this. So early Sunday, the first day they could legally wed, same-sex couples in Washington state held marriage ceremonies immediately after midnight and made plans to get hitched en masse.

At the King County Courthouse, Sarah and Emily Cofer got married in casual clothes at 12:01 a.m., with their 9-month-old daughter in attendance. 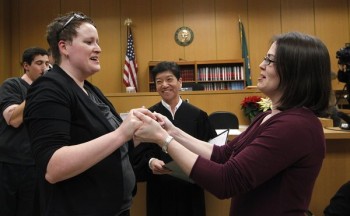 At the same time, the Seattle Times reported, another ceremony took place between Mary Davidson and Monica Rozgay at the Seattle Yacht Club. The brides wore twin white dresses. A photo from the celebration showed a 6-year-old nephew snoozing in a chair after the late-night ceremony.

Sunday morning’s red-eye ceremonies were expected to be followed by waves more throughout the day after the state’s voter-approved law legalizing same-sex marriage took effect.

Robyn Wyss, of Seattle, told the Associated Press that her marriage to five-months-pregnant Danielle Yung was “more emotional than I thought it would be,” adding, “Our friends are here, it’s a beautiful space and there’s all this love and appreciation. We’ve been thinking about this as more of a political celebration for all of Washington state, but obviously it’s very meaningful for us and our future child as well.”

A maximum of 841 same-sex couples could marry Sunday. That’s how many were issued licenses issued across the state on Thursday, according to a tally by county auditors. But that tally could include a few different-sex couples in three counties — including King, the largest — that declined to track licenses by gender.

King County accounted for more than half the licenses issued, and in the three-day gap between licensing and matrimony, officials said they issued an “unprecedented” 623 marriage licenses.

The result: 140 couples were scheduled to marry at Seattle City Hall between 10 a.m. and 5 p.m. Sunday, with each ceremony lasting about 15 minutes.

Sixteen judges volunteered to perform the nuptials for the Seattle couples, which were about two-thirds female, the city said in a blog it set up to document and celebrate the day.

The number of newlyweds could grow even larger by the end of the day.

“We’re ahead of schedule here at City Hall — we can take 10 more couples,” Seattle Mayor Mike McGuinn tweeted. “If you want to marry here, check in at standby on 5th Ave.”

The city set up a live feed that showed the bustling scene inside City Hall, with friends and and families milling around as couples hustled in to be wed.

Among them was syndicated “Savage Love” columnist Dan Savage, who arrived with his partner, Terry Miller, in tuxes even though the two had already wed in Vancouver in 2005. “This happened,” Savage tweeted afterward, with an Instagram photo of him and his husband descending a flight of stairs together.

Other couples showed up in matching outfits, some in military uniforms. More events were scheduled around the city.

The Washington Legislature passed the same-sex marriage bill in February, but foes gathered enough signatures to require a referendum and put the law on hold. Voters ratified the law Nov. 6, along with an aggressive ballot initiative to legalize the sale and possession of marijuana. That law also took effect at 12:01 a.m. Thursday.

Maine and Maryland voters also approved same-sex marriages on Nov. 6, but weddings have yet to begin there.

Vicky Dalton, the Spokane County auditor who headed the statewide marriage licensing effort, said the turnout Thursday for same-sex marriage licenses in Spokane County was lighter than she expected. People filed into the auditor’s office to celebrate and to applaud couples who picked up new licenses, but only 23 were issued that day.

Then that number came into perspective when she heard someone ask a visitor why he hadn’t gotten one.

“They said, ‘I thought you guys would have been one of the first,'” she recalled, “and he said, ‘You know, we woke up and we realized, we don’t have to rush. We don’t have to worry. This is not going away. We can get a marriage license wherever we want now.’ ”

“There’s no rush, nobody has to get down here immediately,” Dalton repeated to herself. “That was probably one of the most powerful moments of the day for me.”