What A Guy! The truth of the matter is this is all about Vatican corruption. It has virtually nothing to do with charitable forgiveness. But it makes for a fabulous photo op, huh? 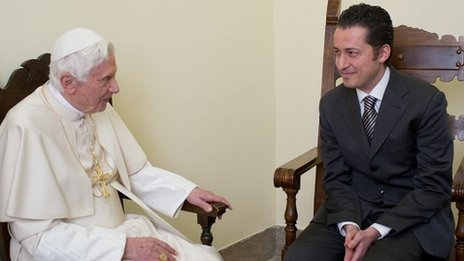 The Pope visited Gabriele in prison to personally inform him of the decision, the Vatican said in a statement.

In October the former butler was found guilty of stealing and copying the Pope’s documents and leaking them to an Italian journalist.

Gabriele said he acted out of love for the Church.

“This morning the Holy Father Benedict XVI visited Paolo Gabriele in prison in order to confirm his forgiveness and to inform him personally of his acceptance of Mr Gabriele’s request for pardon,” the Vatican statement said.

Following Gabriele’s conviction by a Vatican court, officials said he was likely to be pardoned by the pontiff.

In November the court convicted a computer expert, Claudio Sciarpelletti, of helping leak the papal documents.

Sciarpelletti was given a suspended sentence of two months.

Gabriele’s trial heard that he had taken advantage of his access to the pontiff to photocopy thousands of confidential documents.

He later passed some to journalist Gianluigi Nuzzi, who this year released a best-selling book detailing scandals and infighting within the Vatican.

Gabriele confessed to taking the papers, but said he believed the Pope was being manipulated and hoped to reveal alleged corruption at the Holy See.