By a vote of 34-21 (62% in favor, 2 Senators voted ‘present’) the Illinois Senate just passed marriage equality legislation, sending it to the state’s House of Representatives – where if it passes it will certainly be signed by Governor Pat Quinn. Happy Valentines Day! 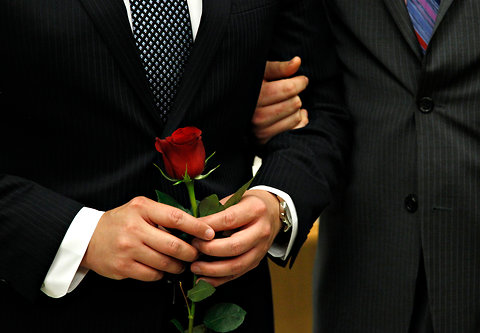 The latest polling in Illinois on marriage equality shows that when voters were asked to choose between marriage, civil unions but no marriage, or no recognition, 46% choose marriage equality, 30% civil unions and only 20% no recognition. A December PPP poll asking whether same-sex marriage should be allowed in Illinois resulted in 47% of registered voters in favor with 42% against.

The Illinois vote continues a series of 2013 legislative victories for equal rights. The Rhode Island House was first up, voting 51-19 in favor in late January. A week and a half ago the United Kingdom’s House of Commons also voted overwhelmingly, 400-175, in support of marriage equality, despite the Conservative government’s not even being able to muster a majority of their own MPs in favor. And just days ago in France the National Assembly got 329 ouis vs 229 nons for President Hollande’s same-sex marriage legislation.

Percentagewise, that’s 73% in Rhode Island, 70% in Her Majesty’s domain, and 59% across the Channel, hefty majorities all.

Paradoxically, even though Illinois is the last so far to vote on marriage equality, it may be the first to make it law.

Rhode Island’s legislation is now stuck in its Senate, where its majority leader is opposed and has not even said yet whether she will allow it to be voted on on the Senate floor (assuming it gets through the Judiciary committee, who’s chair is also not in favor!).

Across the Pond, the legislation still has to go through a lengthy process in committee and in the House of Lords (where it may get voted down or amended into oblivion) before a final reading can happen in the House of Commons. Optimists seem to be suggesting summer or even later before final approval.

In France, the measure is scheduled for the Senate in April, so we could see it enacted and signed sometime in May.

Illinois, though, seems to be on the fastest track towards marriage equality. Its legislation has the vocal support of Chicago’s mayor, the Governor, and even a former Senator from Illinois who occupies an oval shaped office. I haven’t noticed any timeline in the press for a vote in the House but it seems perfectly plausible that a vote in the could be taken in March. The problem at the moment is that no one is yet saying the votes exist there to pass it, despite the House’s 71-47 Democratic majority.

If the same-sex marriage bill is approved in the Senate, the bill still has to pass the House, where it’s expected to meet additional opposition.

Stranger things have happened, but it is hard to see it failing if pressure continues to be applied from the Governor, other state officials, the President’s former Chief of Staff and now Chicago Mayor Rahm Emmanuel, and another nudge or two from the White House. If the votes do appear for passage and the roll is called that would quickly lead to the law being signed. (Couples would be able to marry 30 days after the bill receives the governor’s signature.)

There are further, solid prospects for the advancement of marriage equality around the world in 2013:

After passage by it’s lower house in December, 2012, Uruguay’s Senate is expected to consider a bill legalizing same-sex marriage in April.

New Zealand’s Parliament, having passed a “first reading” of a marriage equality bill back in August by a two-thirds majority, is scheduled to receive the bill back from committee in March and currently has a “second reading” scheduled for March 20th.

The only real downer so far this year has been Hawaii. Its legislature, which consists overwhelmingly of Democrats, has refused to take up marriage equality legislation this year. Despite polling which suggests a majority of Hawaiians are in favor, and despite the state’s only Republican State Senator predicting that the legislation would pass, on February 12th the legislation was iced.

… Rep. Karl Rhoads, who chairs the House Judiciary Committee, told KITV4 the votes simply don’t exist to legalize same-sex marriage. Although a supporter of gay unions, Rhoads says it would be unwise to bring a measure before his committee if the final outcome in the full House is already known, even if the vote is razor-thin close.

“After consultations with my colleagues, I don’t believe we have the political will to pass the measure this session,” said Rhoads. “You never know as an individual how you’re going to vote until you actually get there, but it would be an extremely close vote.”

Perhaps news of the 2012 November elections and the outcomes of same-sex marriage referenda in Maine, Maryland and Washington haven’t yet reached the Hawaiian legislature. Perhaps the fact that Hawaii’s native son, aka the President, is in favor of marriage equality, and that 71% of Hawaii’s voters supported him, isn’t enough.

Whatever the reason, the ultimate result seems inevitable – from the Aloha State to Providence’s Plantations, from New Zealand to the Arc de Triomphe. It’s just too bad the inevitable seems to take so long sometimes.