As cardinals flock to Rome to choose the next pope, two artists have taken the opportunity to stage an exhibition taking aim at the wealth of the Roman Catholic Church and the sex abuse scandals that plagued Pope Benedict. 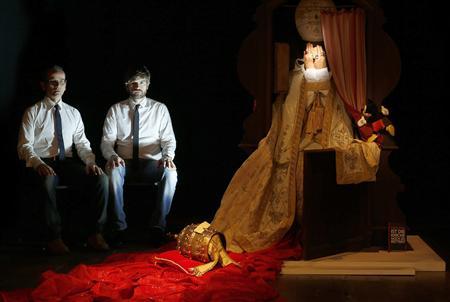 Held in an ancient building where Italy’s patron Saint Catherine of Siena died, “The Unspeakable Act” is a life-size model of Benedict in a confessional box, his sumptuous red and cream-coloured robes spread about him.

Installed on the stage of a darkly-lit theatre, the artwork is surrounded by eerie music and a track of Benedict announcing in Latin his decision to resign after eight years topped with the whispering sounds of people confessing their sins.

Benedict’s papal tiara lies on the ground and his bejewelled hands cover his face in apparent horror or shame at a phrase from the Gospel of St. Luke that lies open on his knee: “Let the little children come to me”.

The exhibition is the work of artists Antonio Garullo and Mario Ottocento who became famous for lampooning the scandals of the powerful in 2012 with an exhibit depicting a sleeping Prime Minister Silvio Berlusconi, his hand in his trousers and a satisfied look on his face.

“Too many scandals have been hidden by the Church. Even children were abused in the confessional,” Garullo told Reuters at a preview of the work on Tuesday.

“These jewels and rich clothes contrast with Christ, who was in rags. The Vatican even has a bank, which is hypocrisy.”

The artwork, that opens to the public on Wednesday, has personal importance for Garullo, 48, and Ottocento, 40, an artistic duo for 20 years who were the first Italian gay couple to be married when they wed in Holland in 2002.

Since then they have battled for their union to be recognised by authorities in Italy, which has no legal provision for same-sex couples, although a 2012 survey found 63 percent of Italians support equal rights for gays.

Their pope statue is surrounded by books by reformist Swiss theologian Hans Kueng and the late Cardinal Carlo Maria Martini, a liberal voice who urged the Church to modernise before his death last year, saying it was “200 years out of date”.

Garullo said the fact that Benedict is ignoring the books is a message to the Church to bring its teaching up to date.

“It shows the Church has remained 200 years in the past, and is not open to the modern world,” Garullo said.