A prominent gay rights activist has been arrested in Zambia after appearing on a live television calling for same-sex relations to be decriminalised. 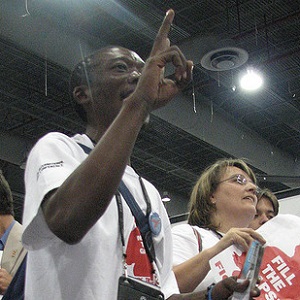 He was detained as he stepped out of the studios of privately owned Muvi TV in the capital, it reports.

Correspondents say many people believe that it is contrary to their religious beliefs.
Petition

Sources at the television station in Lusaka told AFP that police tried to stop the interview and take Mr Kasonkomona off air but the management refused.

“We further urge your government to immediately start a process to decriminalise consensual sex between adults in private irrespective of sexual orientation and gender identity,” the group said.

“This means repealing the laws introduced by the British colonial administration and codified in the Zambian penal code.”

Offences such as sodomy, or sex between women, carry a minimum sentence of 15 years or a maximum of life, it added.

Last week, a group of gay couples attempted to register their marriages but were stopped and the government ordered the arrest of anyone practising homosexuality, AFP reports.

The European Union last month offered financial support for organisations that wanted to promote the rights of gay people in Zambia, it said.

In 2011, both the UK and US warned they would use foreign aid to push for homosexuality to be decriminalised in Africa.

South Africa is one of the few African countries where it is legal.