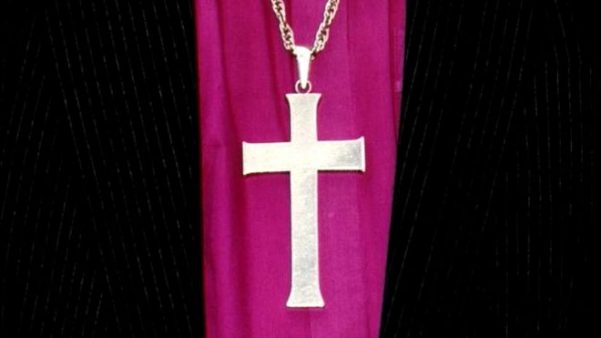 Fourteen Church of England clergy in same-sex marriages have called on bishops to do more to include gay people in the life of the Church.

In a letter to the Sunday Times, they said they wanted to eventually see gay couples allowed to marry in Church.

Some of the clergy signing the letter were revealing they were gay and married for the first time publicly.

Their letter comes after Bishop Nicholas Chamberlain said on Friday he was gay and in a relationship.

Publication comes in the run-up to a College of Bishops meeting from 12 to 15 September which will discuss issues of episcopal ministry and mission.

The clergy said bishops should be bold, and allow gay people to “celebrate without fear and in openness”, though they said that now is not yet the time to change the church’s official understanding of marriage.

The letter reads: “But many in our parishes have already made that move and it is time to respect that a diversity of theology within the Church now exists and that there is more than one understanding of what a faithful Christian may believe on these issues.

“As you meet to discuss, we seek from you a clear lead that offers a way forward to greater inclusion that will enable those parishes that wish to do so to celebrate the love that we have found in our wives and husbands.

“We hope for an outcome that will enable those who wish to do so to publicly celebrate where we see God at work in the lives of our congregations without fear and in openness.”

Bishop Chamberlain revealed he was gay in an interview with the Guardian, in which he said he understood and lived by the Church guidelines, which say gay clergy must remain celibate.

Following the news, the conservative Anglican group Gafcon said appointing a gay man as the bishop of Grantham had been a “major error”.

Bishop Chamberlain was consecrated last year by the Archbishop of Canterbury, Justin Welby – who has said he knew about the bishop’s sexuality.

Same sex relationships and the Church

But the guidance adds: “Getting married to someone of the same sex would, however, clearly be at variance with the teaching of the Church of England.”

In particular, it says “It would not be appropriate conduct for someone in holy orders to enter into a same sex marriage.”

The Church also teaches that “Sexual intercourse, as an expression of faithful intimacy, properly belongs within marriage exclusively.”

However, these sentiments have not been followed throughout the Anglican communion.

In the US, Gene Robinson’s election as Bishop of the Episcopal Diocese of New Hampshire in 2003 provoked a furore from conservative Anglicans around the world, and contributed to the rise of the conservative Gafcon movement.

In the UK, the Dean of St Albans, the Very Reverend Jeffrey John entered into a civil partnership in 2006.

He was twice tipped to become a bishop – at Reading in 2003, then at Southwark in 2010 – but was not appointed. On both occasions his sexuality was stated as a “difficulty” for Church of England – despite his assurance that he was committed to sexual abstinence.

The Church of England’s teaching remains that marriage is for heterosexual couples – with clergy permitted to live celibate lives in civil partnerships – although these rules have never been tested by a church court.

Speaking in January, the Archbishop of Canterbury apologised for “hurt and pain” caused by the Anglican Church to the LGBT community.

The letter to the Sunday Times called on the bishops to to be “honest about what many of you already believe from your own experience, and to what you know to be increasingly the direction of travel, not just in our Church but in many churches in this country”.

It added: “We will always want to see the full inclusion of LGBTI people in the Church, and we will continue to work towards it. We look forward to welcoming a first step in that process and a move away from the harm and hurt that has so often been done in the name of the Church.”

The bishops have already received a letter from 72 traditionalist members of the ruling general synod encouraging them to abide by biblical teaching on sexuality.

LGBTI Mission, which campaigns for the acceptance of LGBTI people within the Church of England, welcomed Bishop Chamberlain’s announcement.

It said: “We hope this will lead to increased openness among bishops so that burden does not long remain on the Bishop of Grantham alone.”

The letter’s signatories are:

The Times said a further seven clergy couples and Readers have indicated their support for the letter but wished to remain anonymous in order to protect themselves, and often their bishops, from attack.