File Under:  Can Ya Stand IT? 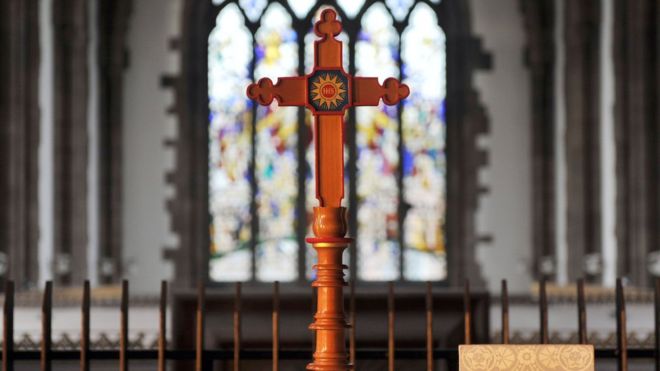 A Church of England theological college has expressed regret after trainee priests held a service in the antiquated gay slang language Polari.

The service at the chapel of Westcott House in Cambridge was to commemorate LGBT history month.

The congregation was told the use of the lexicon was an attempt to “queer the liturgy of evening prayer”.

But officials said it had not been authorised and was at variance with the doctrine and teaching of the church.

Polari is thought to have originated in Victorian London but fell out of use as homosexuality began to be decriminalised in England in the 1960s.

Its words, however, were brought to wider public attention in the same decade by comedian Kenneth Williams in the BBC radio series Round the Horne.

One person present at the service told BBC News it was led by an ordinand – a trainee priest – rather than a licensed minister.

The congregation was also made up of trainees.

While they had been given permission to hold a service to commemorate LGBT history month, a Church of England source said the college chaplain had not seen the wording of the service.

The translation was based on the Polari bible, a work compiled as a project in 2003 by the self-styled Sisters of Perpetual Indulgence.

The scripture and liturgy were printed on to an order of service.

An Old Testament reading from the Prophet Joel which says “rend your heart and not your garments, return to the Lord your God” was printed in Polari as “rend your thumping chest and not your frocks – and turn unto the Duchess your Gloria: for she is bona and merciful”.

Services in the Church of England are legally required to be conducted using the church’s approved liturgy.

The principal of Westcott House, the Rev Canon Chris Chivers, said the liturgy of the service had not been authorised for use.

He said: “I fully recognise that the contents of the service are at variance with the doctrine and teaching of the Church of England and that is hugely regrettable.

“Inevitably for some members of the house this caused considerable upset and disquiet and I have spoken at length to those involved in organising the service.

“I will be reviewing and tightening the internal mechanisms of the house to ensure this never happens again.”