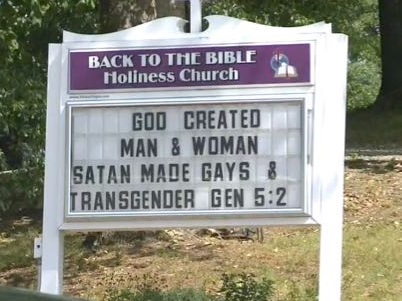 Every time I tell my story in front of a religious group the question comes up. I know it’s coming. I dread its coming. Because I still haven’t come up with a good answer.

What is the question?

“If God doesn’t make mistakes, then why are you transgender?”

Ooooof, right? I mean, where do you even start?

On the one hand, I kind of want to say, “Don’t know. Don’t care.” Mostly because the question never quite feels genuine. Or it feels like it’s a way to say that I am not really who I say I am. And listen, whatever your feelings about transgender people, we do actually exist. I am one of them.

So I tend to hem and haw a bit, trying to come up with something that will make sense and actually do what I believe justice.

Here’s the answer that I think doesn’t work (though I might have been guilty of giving it early in my transition): There are lots of things in the world that are bad: cancer, death, terminal illness, violence, war. The fact that those things exist isn’t a result of God making mistakes, it’s a result of the world being not as it should be.

Here’s why that answer no longer works for me: Cancer, death, violence, all of those things are unequivocally bad. There is no question that they are evil and terrible. So to equate being transgender with those evil things? It just turns my stomach. It makes being transgender a pathology. A liability. It makes it something to be eradicated. And there are enough people who are trying to eradicate transgender identity. We don’t need to throw fuel on that fire.

Another answer that seems slightly better but still leaves me unsettled is this: Well, there are a lot of things in the world that aren’t the ideal; they aren’t “God’s best” (to use an evangelical term). The reason it’s slightly better is that it acknowledges that being transgender is hard for a lot of people. It’s something we had to work hard to come to grips with. It adds stress and trauma into our lives. For some of us we do wish we weren’t trans (but that usually means we wish we were born with everyone knowing our actual gender). Again, though, this pathologizes being trans. It makes us seem like people to be pitied. It steals our agency.   And it also erases this simple truth for me: I am a better person because I am transgender. I am a better man because I am transgender.
Had I been born a cisgender man I would have had a very different life. See, I was born into a fundamentalist evangelical household and church. I was born with a calling to ministry and an ability to lead. Had I been born a cisgender man those abilities would have been nurtured. I would have been given everything that I ever wanted probably without having to work very hard. I wouldn’t have had to question my faith or my place in the church. It would have been all laid out for me. It would have been easy.

But it’s been the hard that has taught me the most. It’s been the hard that has made me concerned with the outcast and the marginalized and brought me closer to the heart of Jesus and the Gospel. I have questioned my faith which means that it is mine. It’s not what was handed down to me, no it has been tried and tested. It has been strengthened. It has been made beautiful in the struggle.

My gender journey has taught me empathy and compassion. It’s opened my eyes to oppression and systemic injustice. Might I have learned all of that as a cisgender man? Maybe. But it’s unlikely.

So do I wish I had been born a cisgender man? Yes. And no. And yes. And no.   Bottom line: This is who I am. And my faith is strong.