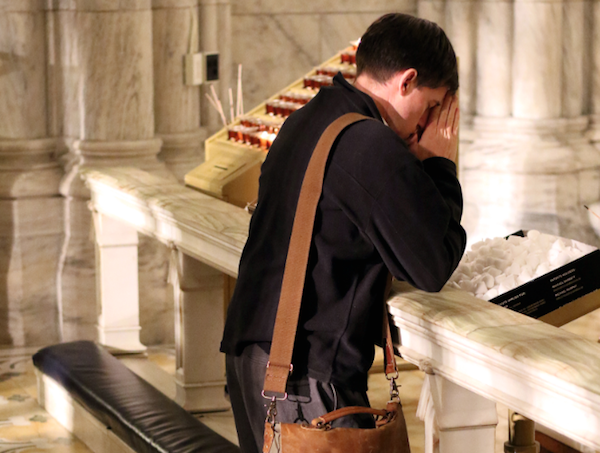 Two years ago Cardinal Vincent Nichols asked me to be his liaison and chaplain to the Farm Street LGBT group in central London. That same week I was invited to be chaplain to the London chapter of Courage, an international support group. My work includes one-to-one spiritual guidance, helping with reflection days and accompanying both groups as an official representative of the Church.

Ministry to homosexual Catholics (transgenderism would need a separate article) takes place in two main contexts. First, groups like the Farm Street group set up by gay people themselves or their relatives, where everyone knows they are welcome, whatever their situation, and issues can be openly discussed. Such groups often later seek the support of their local bishop and priests.

Secondly, bishops or priests can set up groups themselves, and even obtain Vatican recognition, provided they are explicit in their adherence to Church teaching. Courage is such a group, set up by Fr John Harvey in America with the support of bishops there, and now present in several countries. Members describe themselves not as gay but as “experiencing same-sex attraction” and aim at lifelong sexual abstinence – but not at changing their sexual orientation.

Pastoral care of homosexual people is essentially the same as all ministry: seeking to communicate the unconditional love of Christ and his Church, and to accompany people on their journey towards holiness. But in practice this particular ministry encounters powerful feelings of pain and anger which can cause difficulties.

LGBT people often feel hurt by the Church, either because of the way its teaching comes across, or through concrete experiences of rejection, or both. Those from non-Western cultures are sometimes even in danger of their lives, while some other Catholics seem threatened by the very existence of gay people and react angrily towards attempts to accommodate them within the Church.

There is also a wide range of attitudes, experiences and behaviour among gay Catholics themselves. Some long for a permanent relationship, while others admit that relationships are not important for them, and they simply want sex. With the availability of gay websites and apps, and well-known pick-up spots, most gay people in our society can easily have sex whenever they want.

We sometimes meet men who had a lot of casual sex but came to realise it did not make them happy. They may then seek help in leading a chaste life. Courage provides them with a supportive group, modelled on twelve-step programmes, in which personal sharing enables exploration of the relationship between sexual desires and other aspects of life, and so helps mitigate the compulsive element which can easily affect sexual behaviour. Others are looking for a long-term relationship, but may go through several sexual partners in the search, sometimes remaining good friends with them after the sexual relationship has ended.

But one thing is common to virtually all LGBT Catholics today: they will not take the Church’s teaching on trust, but must learn from experience. Even those who hold a very traditional attitude have likely arrived at it through many experiences.

This being so, ministers to gay Catholics need two main resources: a moral theology that can face the critical scrutiny of life experience; and a well-grounded spirituality of discernment. These can help LGBT Catholics look honestly at their behaviour, see where it is leading them and discover alternatives where indicated.

The moral theology I have found most helpful in this ministry is that of the Belgian Dominican Servais Pinckaers, who shows that from biblical times to St Thomas Aquinas, Catholic moral theology was essentially based on the search for true happiness, on earth and in heaven, and on the cultivation of virtues leading to it – a happiness deeper than mere pleasure, and consisting above all in communion with God and his holy people.

A theology based on observing rules was a later distortion, and led by reaction in the 1960s to an equally unhelpful liberalism.

In Pinckaers’ perspective, moral theology does not just define what one is allowed to do, or the minimum one must do, but joins hands with spirituality in promoting the search for holiness through loving God and neighbour to the uttermost. Ignatian discernment of spirits is the obvious spiritual partner for such a theology.

Thus the most important gift the minister can offer LGBT people, after unconditional love and welcome, is encouragement to a deep spiritual life of friendship with Christ, based on the traditional practices of Mass, Confession, Adoration, Lectio Divina and the rosary. Without this, discernment loses itself in subjective states of mind; with it we begin to see which path leads to heaven and which to hell, and to marry personal experience with the wisdom of the Church.