While Poland remains more socially conservative than many countries in Western Europe, attitudes to LGBT+ issues are changing. We speak to activists standing strong in the face of oppression. 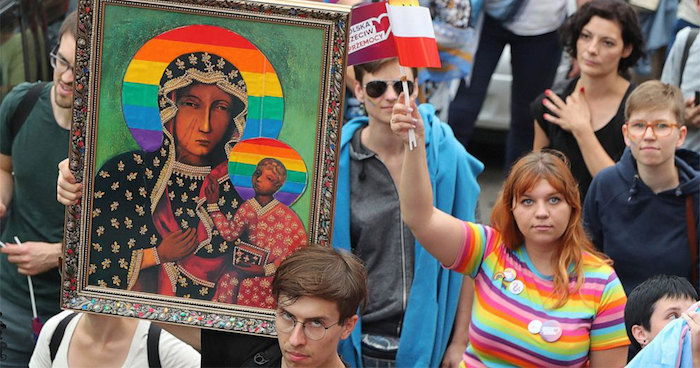 by Will St Leger

In the lead up to the Polish elections in October this year, LGBT+ people became a central cultural issue in the country’s election campaigns. Law and Justice (PiS) – Poland’s Christian democratic and right-wing populist party – demonised the community to win votes in what is still considered a Catholic country. Jaroslaw Kaczynski, the leader of Poland’s ruling party, used the populist playbook to identify perceived threats to society. According to Mr Kaczynski, those threats come from LGBT+ people and from Europe, where families can have “two mummies or two daddies”.

The Catholic Church’s anti-gay rhetoric has become the ruling party’s dominant theme. Recently the archbishop of Krakow, Marek Jedraszewski, described Poland as under siege from a “rainbow plague” of gay rights activists. In the past, the archbishop identified the “LGBT lobby” and “gender ideology” as the new threat to national freedom.

In Poland, same-sex unions are not legal. Gay couples can’t take out loans, settle taxes together, or inherit. There are no laws protecting LGBT+ people from hate crime. Life for Polish LGBT+ folk feels increasingly dangerous, especially in rural areas. Back in July, participants at a Pride parade in Bialystok in the east of the country were attacked by a violent mob, leaving many people injured. Scenes of these attacks sent shock waves across social media. In the same month, a right wing newspaper, Gazeta Polska issued “LGBT-free zone” stickers to readers which drew widespread criticism from Polish opposition parties and diplomats.

It’s midday, I’m in central Warsaw and I’m visiting the offices of Lambda, Poland’s longest running LGBT+ organisation. I’ve arranged a meeting with Krzysztof Kliszczyński, a seasoned Polish LGBT+ activist, and Sławomir Kirdzik, a 22 year-old student at Warsaw University and an intern with Lambda. I begin by asking Krzysztof about the recent elections and how anti-LGBT+ rhetoric is impacting life for the community.

Krzysztof begins, “One year ago LGBT+  people were not the topic of national political discussion, then in February this year, within days of the mayor of Warsaw signing a pledge to protect LGBT+  rights in the capital, the ruling party launched its attack on the LGBT+ community.”

“When I’m on the street I don’t have a problem expressing myself, because it’s more important that other young people see that there are people just like them.”

Sławomir points to his bag, which has a rainbow flag patch sewn on it, “When I carry this bag, I hear people behind me on the street calling me a ‘faggot’ nearly everyday, however there are lots of supportive people trying to help me.”

Krzysztof expands on the history of youth movements in Poland; “30 years ago, young people led the political wave against communist rule, my generation led the second wave of establishing LGBT+  groups like Lambda and greater rights for LGBT+ people, now we are seeing a newer generation of 15 and 16 year-olds that have witnessed the progress of LGBT+ rights throughout Europe who aspire and campaign for those rights too.”

Despite the violence and political rhetoric, Poland has seen an increase in the number of Pride marches and attendees. Two years ago there were seven Pride/equality marches, last year there were 70. Public opinion is shifting too – a recent survey showed 57 % support same-sex civil partnerships – the positive responses were mainly from younger people, especially women living in cities. Younger men in rural areas tend to have the most negative views of same-sex relationships and LGBT+ rights.

That evening, Krzysztof and Sławomir invite me to come back to the office as an LGBT+ youth group hold one of their weekly meetings. About 20 young people are sitting in a circle chatting among themselves. I’m introduced to a trans man called Hugo, I’m interested to learn about the legal and cultural status of trans people in Poland and find it’s not quite what I expect.

Legal gender recognition has been known to Polish courts since the late 1960’s. Changing a person’s gender marker is done through a court process known as the “assessment suit”, in which an individual has to literally file a lawsuit against their parents and both parents must agree.

A person going through gender recognition in Poland is subjected to physical examination, along with psychological and psychiatric evaluations. After those are fulfilled, the diagnostician decides whether to prescribe hormones. While it is possible to receive hormonal treatment without the diagnosis, this practice might be problematic for further court procedures.

To gain legal recognition as a woman one has to undergo several months of hormonal therapy. Recognition of masculinity requires undergoing chest surgery as well. In this case, one could say that Poland is strictly divided into west Poland, where trans men are not forced to undergo any surgeries, and east Poland, where mastectomy is often required before the court process can begin. Mastectomy is labeled as a condition for receiving the relevant documents needed for the lawsuit (against your parents). Some good news came in 2016, when a court in Warsaw issued a decision that allowed a Polish citizen, who transitioned legally in Germany, to change her personal data (gender marker, and first and last name) without obtaining a transsexual diagnosis and going through a civil court case in Poland.

I asked Hugo about his real life experience of being trans in Poland. He said, “It took my mother time to adjust but recently she has started using he/him pronouns when addressing me and that made a big difference.”

The Catholic Church’s grip on the country also seems to be softening. Poland is now experiencing the same scrutiny about historical sexual abuse within the clergy as the Catholic Church in Ireland did in the 1990’s and early 2000’s. This year, an independent Polish documentary directed by Tomasz Sekielski called Tell No One unearthed cases of child sexual abuse. The film addresses the issue of responsibility of the Episcopal Conference of Poland for hiding paedophile priests from the law. It was posted on YouTube in May, 2019, and received over a million views in the first five hours – a new record for Polish YouTube. Seven months later it’s had over 23 million views. Following the film, the National Public Prosecutor’s Office stated that they had established a team of prosecutors, whose task it is to analyse the cases presented in the documentary.

From the outside, Poland may seem an outwardly conservative country out of step with progressive Europe regarding LGBT+ rights, however, looking closer, I see a country that is not dissimilar to Ireland in the late ‘80s. The government are deflecting their economic failures by creating misdirection and stirring up hatred against LGBT+ people and immigrants. As the cracks appear in their cover up of clerical abuse of children, the Catholic Church are under scrutiny and using the age-old tactic of blaming LGBT+ people for their own sins. The next few years will be crucial for LGBT+ people. If broader society can continue to mobilise behind the community, Poland could to shift from a theocratic state into a more modern and pluralist society.