Following a 37-30 vote in the Minnesota Senate yesterday, the bill that would soon make Minnesota the 12th state to legalize same-sex marriage was officially headed to it’s final destination: the desk of Governor Mark Dayton. 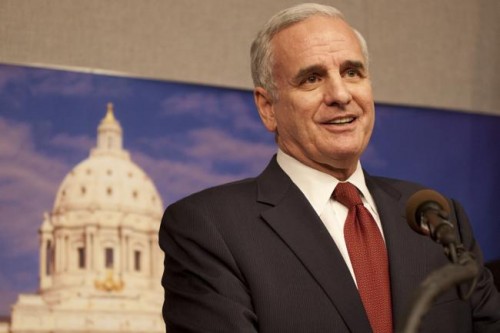 Dayton, a longtime supporter of marriage equality, made a celebration of the landmark event by holding a signing ceremony on the south steps of the Capitol just moments ago.

“What a day for Minnesota, and what a difference a year and election can make in our states,” Dayton told the cheering crowd before he signed the bill. “Last year there were concerns that marriage equality would be banned here forever. Now my signature will make it legal in two and a half months.”

Dayton’s signature on the bill will make Minnesota the first Midwestern state to legalize same-sex marriage by legislative vote, and the third state within the last month, following victories in Rhode Island and Delaware.

Now that the bill has been signed into law, it will take effect on August 1. Something tells us Minnesota’s ministers are in for a fabulous fourth quarter!

One Reply to “And then there were 12”