The Church of England has voted to allow women to become bishops for first time in its history. 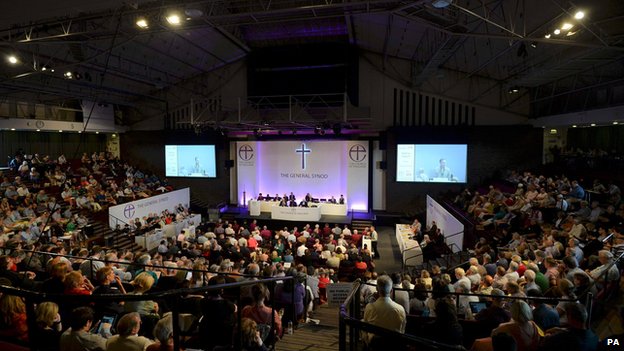 Its ruling General Synod gave approval to legislation introducing the change by the required two-thirds majority.

A previous vote in 2012 was backed by the Houses of Bishops and Clergy but blocked by traditionalist lay members.

The Archbishop of Canterbury Justin Welby said he was “delighted” but some opponents said they were unconvinced by the concessions offered to them.

The crucial vote in the House of Laity went 152 in favour, 45 against, and there were five abstentions. In November 2012 the change was derailed by just six votes cast by the lay members.

In the house of Bishops, 37 were in favour, two against, and there was one abstention. The House of Clergy voted 162 in favour, 25 against and there were four abstentions.

It is hard to exaggerate the significance of today’s decision at the York Synod.

It breaks a hitherto unbroken tradition of exclusively male bishops inherited from the first Christians almost 2,000 years ago.

Some Anglicans see it as a “cosmic shift” – arguing that the Church’s theology has been changed by its acceptance that men and women are equally eligible to lead and teach Christianity.

With the decision, the Church is acknowledging the importance secular society places on equality, signalling that it wants to end its isolation from the lives of the people it serves.

The legislation leaves traditionalists relying largely on the goodwill and generosity of future women bishops, a source of anxiety for many, but heralded by some as a sign of a new culture of trust and co-operation in the Church.

With the even more divisive issue of sexuality on the horizon, the Church will need that culture as never before.

Before he announced the vote, the Archbishop of York John Sentamu, asked for the result to be met “with restraint and sensitivity”. But there was a flurry of cheers when it was announced.

The result overturned centuries of tradition in a Church that has been deeply divided over the issue.

It comes more than 20 years after women were first allowed to become priests. More than one-in-five of priests in the church are now female.

The motion will now go before Parliament’s ecclesiastical committee, which examines measures from the Synod. The Synod would then meet again on 17 November to formally declare that women can be bishops.

‘Big moment’The first woman bishop could potentially be appointed by the end of the year.

The Dean of Salisbury, the Very Reverend June Osborne: “It’s one more barrier down”

The vote followed after almost five hours of debate at the University of York.

The Dean of Salisbury, the Very Reverend June Osborne, said it was a “historic day”.

She told the BBC: “I don’t think you can overstate the fact that the Church of England allowing women to take up the role of bishop is going to change the Church.

“I think it’s going to change our society as well because it’s one more step in accepting that women are really and truly equal in spiritual authority, as well as in leadership in society.”

The Reverend Lindsay Southern, from the parish of Catterick with Tunstall, North Yorkshire, said “it’s been a really long journey but we were so pleased with the graciousness of the Synod debate”.

But Lorna Ashworth, a lay member of the Synod who voted against women becoming bishops, suggested it was “not going to be a smooth road ahead”.

She said she had no plans to “run away” from the Church but predicted there could be “difficulties” in a number of areas, such as those involving new priests opposed to the changes.

Another lay member, Susie Leafe, director of the conservative evangelical group Reform, said she was “very disappointed” by the vote.

“There is still at least a quarter of the Church for whom this package does not provide for their theological convictions,” she said.

The motion had the backing of the Archbishop of Canterbury and Prime Minister David Cameron.

Speaking in the debate, Archbishop Welby said Church of England bishops were committed to meeting their needs should the legislation be passed.

It contained concessions for those parishes that continue to object to the appointment of a women bishop – giving them the right to ask for a male alternative and to take disputes to an independent arbitrator.

In a statement issued by Lambeth Palace later, Archbishop Welby said: “Today marks the start of a great adventure of seeking mutual flourishing while still, in some cases disagreeing. The challenge for us will be for the church to model good disagreement and to continue to demonstrate love for those who disagree on theological grounds.”

The Archbishop of York said it was a “momentous day”.

He said: “Generations of women have served the Lord faithfully in the Church of England for centuries. It is a moment of joy today: the office of Bishop is open to them.” 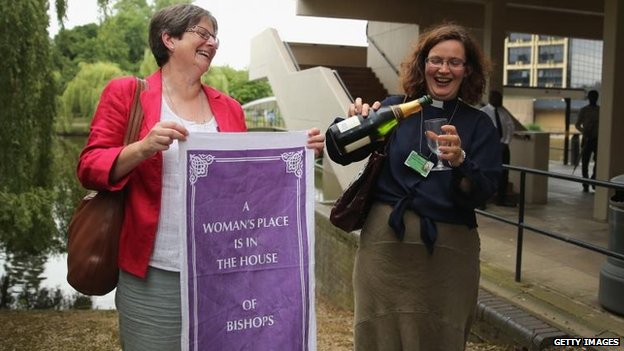 There were celebrations outside the General Synod meeting at York University

Mr Cameron said it was a “great day for the Church and for equality”.

And writing on Twitter, Deputy Prime Minister Nick Clegg praised Archbishop Welby’s “leadership” on securing the Yes vote, adding that it was a “big moment” for the Church of England.

But Prebendary David Houlding, a member of the Catholic Group on the General Synod, who voted against the legislation, expressed concerns at the potential impact the result could have on relations with the Catholic Church.

The Anglican Communion has the largest Christian denomination in Britain and a presence in more than 160 countries. Women bishops are already in office in a number of provinces including the US, Canada, South Africa, Australia and New Zealand.