RITE AND REASON: ONE NIGHT in 1952, a German boy of 19, in the throes of a youthful romance, became overwhelmed with the certainty that God wanted him as a priest. In the following days he felt he could not pray “Thy will be done” if he refused the call.

And yet during those same days he found himself weeping uncontrollably, “shadowed with darkness because, for the sake of the priestly vocation, I had to accept the renunciation of marriage”. 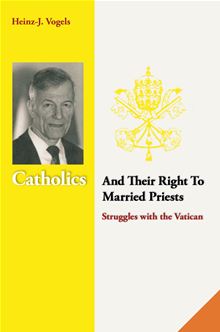 Heinz-Jurgen Vogels stayed with his vocation all the way to ordination, for the call had taken place “with such inner force that it carried me over the threshold of priesthood, yet only to drop me burnt out immediately after that.”

The couple of years that followed Vogels’s 1959 ordination were years of unrelieved depression, inability to function in his priesthood, leading him eventually to the brink of suicide.

“Only years later was I able to recognise that my subconscious, at the ordination, had concluded: ‘Now, finally, the door to marriages has closed; now there is no longer any rescue for my desire to have feelings for the other half of humankind, which is, however, part of my nature.’”

The crisis came in his little Cologne room overlooking the Rhine: “The abandonment in the colourless grey room was felt so greatly that I stopped again and again at the washstand, and took the razor blade to cut open the arteries in my wrist. Only with extreme effort could I return it to the glass plate. The window, the Rhine, the rail tracks, everything attracted me almost irresistibly.”

Vogels was sent to a rest home for a while and then resumed duty, living with an understanding old parish priest in a village in the Eifel mountains.

“It was a time of long conversations in the evenings, seated in comfortable armchairs. Yet it should take another five years before the fog was dispelled.”

It happened after a pilgrimage to Kevelaer: “It may sound strange that during my prayer I found rising in my soul the dear wish: ‘Oh would I be allowed to use sexuality!’”

And then came the revelation in a verse from St Paul’s first epistle to the Corinthians: “Have we perhaps not the right to take a wife along with us, like the other apostles . . ?” (1 Cor 9:5) – the word “mulier” being open to interpretation as “wife” as well as “woman”.

That linked up with the sudden realisation that there were already married priests in the Catholic Church – all the Eastern Catholic churches in union with Rome had their married priests, and even here in the West, Protestant pastors could become Catholic priests and then live openly with their wives and families.

The rest of Vogels’s life has been a one-man crusade to convince the authorities in Rome to abolish compulsory celibacy. This story is told in his extraordinary book, Alone Against the Vatican , now available in English.

Unfortunately the publishers have chosen a less striking title, Catholics and their Right to Married Priests , with the subtitle, Struggles with the Vatican . It’s readily available in paperback from Amazon and is also on Kindle eBooks.

Those struggles make for a fascinating story. The first declaration of his views in a sermon led to such a rumpus that he was diagnosed with “endogenous mania”, church authorities holding that anyone with such views had to be round the bend. But Vogels stayed sane, dangerously so, grew as a theologian and disputant and gradually his crusade developed.

Inevitably came marriage to Renata, plus a challenge to Vatican authorities to declare his marriage invalid, which they declined to do.

All these years later, Vogels is still fighting his case, alone against the Vatican. The kernel of his argument is that the gift of priesthood and the gift of celibacy are separate, and only rarely are bestowed on one person.

Hence the horrors that we see around us here in Ireland, when attempts at staying celibate fail. Vogels even has the support of Vatican II, which declared that celibacy “is not required by the very nature of priesthood”.

This fascinating book is just Vogels’s latest salvo. But what comes out most clearly is the steadfastness, devotion, support, indeed heroism, of Renata. She, indeed, is the best of all arguments for what a helpmate could be for a priest. 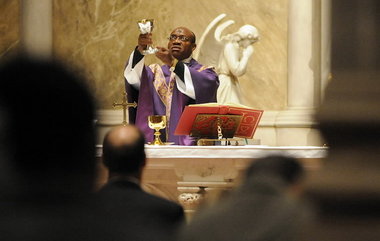 A married Roman Catholic priest from Burnley has said he believes the church is correct to prefer single celibate clergy in their parishes.

Father Paul Blackburn is the most recently ordained priest into the Salford Diocese.

He is married with three children. 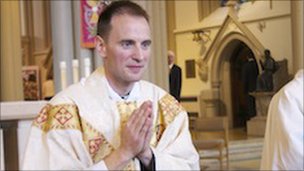 A former Anglican minister, Father Paul embraced Catholicism after growing dissatisfied with the direction the Church of England was taking on some moral issues.

He said single priests are better placed to serve God by giving their entire life to his ministry.

“Whatever the church decides about the future shape of ministry there will always be a need for celibate priests,” Father Paul told BBC Radio Lancashire.

For centuries, the Roman Catholic Church has insisted that its priests be both single and celibate claiming it is God’s will.

They say it has apostolic authority and back up the argument with biblical references.

Critics, amongst them some practising clergy in the church, say laws of celibacy are a more earthly ruling and did not apply in the early days of the church.

Saint Peter, the first pope, was married and so were some subsequent popes and bishops.

The rule of clerical celibacy is a church law and not a doctrine, thus the Pope can alter the ruling at any time.

The current pontiff, Pope Benedict XVI, is staunchly in favour of the status quo. However, he can and does allow former married Anglican minsters to become Catholic priests with each case being viewed on an individual basis.

In recent times this was seen as a gift from the Pope and is also now part of the ordinariate as some Anglicans struggle to remain in the Church of England.

Many Catholics believe that a married priest is a more rounded priest whose experiences can help deal with family issues better than his single colleagues.

“A celibate priest can give so much more,” he said. “They can give themselves and everything about them. They can give to the church and to the service of God. I can give what I give but a proportion of my time will always go to my family.”

Father Paul Blackburn was born in Burnley where he attended Ivy Bank School.

Whilst a parishioner in his early twenties at St. Catherine’s in the town he was accepted for training at the prestigious College of the Resurrection in the West Yorkshire village of Mirfield.

He was ordained into the Blackburn Diocese and then moved to the East Midlands to take his ministry to at a city parish in Derby.

It was there, towards the end of the nineties, that Father Paul began to have worries about the future direction of the Anglican Church.

“I will always be grateful to the Church of England, but I began to have serious doubts about the direction the church was going. It was the ethical dilemmas that worried me, particularly about medical issues like abortion. I felt more and more that the Church of England wasn’t protecting the belief that life should be upheld from conception.”

“For me personally, I felt the Catholic Church upholds that conviction about all human life however it presents itself to us.” he continued.

Father Paul’s first role as a Roman Catholic priest was to join the chaplaincy team at Blackburn Royal Infirmary. “I have met some lovely people at the hospital, both staff and patients, and it is a privilege to minister to them,” he said.

He is one of two priests ordained into the Salford Diocese this year – the average number of new priests per diocese, and a statistic that worries many Catholics.

Even though the church is struggling to find enough priests to cover its parishes, Father Paul still isn’t in favour of relaxing the church rules to accept vocations from priests who wish to marry.

“The world around us is changing and there are less and less people going to mass,” he said.

“It is almost as if the culture has forgotten that we are a Christian country. Less people are going to church but the people who are there are there because they are committed.”