The Catholic Pray the gay away program…except they don’t call it gay. They’re so clever! 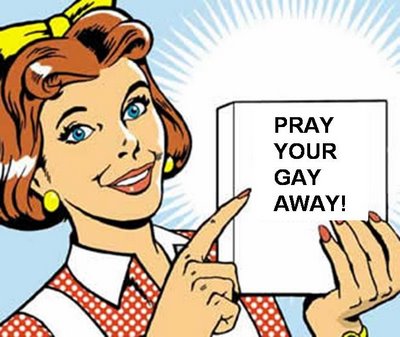 The Roman Catholic Diocese of Portland is setting up a ministry to support people with same-sex attraction.

The spiritual support group Courage refers to itself as a “pro-chastity” ministry on its website, www.courageRC.org. It has more than 100 worldwide chapters and more than 1,500 participants, said Sue Bernard, communications director for the Roman Catholic Diocese of Portland.

“Courage offers hope and encouragement to men and woman who desire to live in accordance with the church’s teaching on homosexuality — specifically that the dignity and identity of every person is not determined by their sexual attractions, but by their relationship with the Lord and their striving to live the virtues of faith, hope and charity,” she said.

The Catholic Church emphasizes sex within the context of marriage and the importance of chaste living, Bernard said.

“If you’re married, chaste living is being faithful to your spouse,” she said.

An informal support group had been meeting before the first referendum about same-sex marriage in 2009. Bernard did not have an estimate of the number of people who participated.

After representatives spoke to Bishop Richard Malone and wanted the church’s assistance, the group received formal recognition. It has a chaplain, Fr. Kevin Martin. Martin serves as parochial vicar in the Augusta area, Bernard said.

The Courage website has a section called “The 12 Steps of Courage,” based on the 12 steps from Alcoholics Anonymous. Step one says, “We admitted that we were powerless over homosexuality and our lives had become unmanageable.”
The support group has a policy of anonymity and confidentiality, Bernard said. Locations will be disclosed to people who plan to participate in it.