The California governor has signed into law a bill that will not simply require a “gay history” curriculum.

It requires a form of “indoctrination” that will label Christianity as being intolerant and bigoted, one critic says. 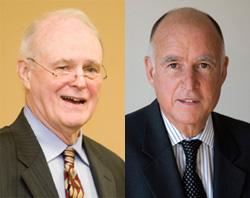 “The bill is not about teaching gay history. That’s what the sponsors of the bill are portraying it as. That is not the language of the bill. That is not what it does, that’s not the intent,” William B. May, head of the San Francisco-based Catholics for the Common Good, told CNA on July 15.

While the history of the gay rights movement would be covered in history books as history, he said, the bill’s curriculum standards require “bringing to the attention of students the sexuality of people in history and social studies, who happen to be gay, lesbian, transgender or bisexual.”

“It also has the effect of making sure that they are portrayed in a good light,” May continued.

“It’s really an indoctrination bill that is being totally misrepresented by the politicians and by the media.”

Gov. Jerry Brown signed the bill into law on July 14 after it passed the Democrat-controlled legislature on a largely party-line vote.

“We’re disappointed that the governor signed it,” May said. “It’s a troubling precedent for politicians to dictate what’s in textbooks.”

Democratic state Sen. Mark Leno of San Francisco, the bill’s author, said that teaching gay history in public schools will teach students to be more accepting of gays and lesbians.

“We should not be afraid to teach our children of the broad diversity of human experience,” Sen. Leno said, according to Fox News. “It’s not going away, it’s always been with us. We have different kinds of people, who are, under law, to be treated equally. Why would we not want to teach our children this?”

He compared opponents to those who criticized curriculum requirements for ethnic and women’s studies.

However, May warned that the curriculum requirements will have adverse effects on groups that disapprove of homosexual behavior.

“This bill will contribute to Christianity coming under attack in the classroom as being intolerant, bigoted, and standing in the way of progress,” he told CNA. “This is part of a broader agenda to redefine love, relationships, marriage and family.”

He noted the related public debate about bullying, which he called “a serious problem” that “needs to be dealt with directly.”

He rejected the claim that curriculum requirements would reduce bullying.

“It’s absurd to think that teaching about the sexual characteristics or sexual orientation of people in history is going to have any bearing on that,” he continued.

Archbishop Jose Gomez of Los Angeles has also criticized the bill. In a July 5 column, he called it “another example of the government interfering with parents’ rights to be their children’s primary educators.”

The bill could have national effects.

Because of California’s size and influence, many textbook publishers adjust their products to meet California curriculum standards.

May said the bill’s passage into law is “just one more wake-up call for the need to organize.”

He pointed out that Catholics for the Common Good has launched projects like Stand with Children, a marriage advocacy program.

It is also organizing a program called Faith in Action, which consists of small formation and support groups for “not just defending marriage and family, but promoting it.”