SPRINGFIELD, Mass. (CNS) — Many Catholics in the Springfield Diocese mourned the loss of Father Paul J. Archambault, a 42-year-old priest who was found dead July 3 at the rectory of Our Lady of the Sacred Heart Parish in Springfield.

Springfield police confirmed that the priest, a chaplain at Baystate Medical Center in Springfield and a part-time parochial vicar at St. Mary Parish in Hampden, died from a self-inflicted gunshot wound. 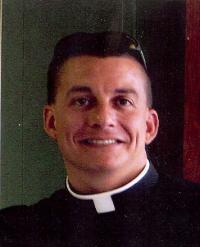 “We are all diminished by the tragic death of Father Paul Archambault. He was a good and pastoral priest, a caring chaplain and a devout man,” said Springfield Bishop Timothy A. McDonnell in a statement.

“Yet he was not immune to illness,” he added. “Most of us realize that physical illness can be fatal; we sometimes forget that the same is true of illnesses that have no physical cause but wrack the spirit still.”

He prayed that God would bring the priest “safely home, rewarding all the good he accomplished and relieving the burdens he found unbearable.”

Bishop McDonnell was scheduled to celebrate a funeral Mass for Father Archambault July 12 at St. Elizabeth Ann Seton Church in Northampton, to be followed by burial at St. Mary’s Cemetery there.

“We know that he had been quite busy performing his priestly duties throughout the holiday weekend, which was very typical as he was a very dedicated and devout young priest,” said Dupont.

Father Archambault was scheduled to celebrate Mass at St. Mary’s again July 3. When he didn’t show up, friends and family members became concerned and started a search.

“Throughout the day Sunday, with assistance from Springfield police, calls were made to anyone who might have had contact with Father Archambault. Later, in the afternoon, based on some information that had been received, another search of the rectory was conducted and his body was discovered,” Dupont said.

The priest graduated from St. John’s Seminary in Brighton, Mass., in 2000 and was ordained in the Diocese of Springfield in 2005.

For the last several years he led a eucharistic rosary procession through the streets of Northampton, where he grew up. The priest was also very involved in the diocesan pro-life efforts. He took part in prayer vigils for life and was often seen praying in front of the Planned Parenthood League of Springfield.

Robin Sheehan, who knew Father Archambault through the pro-life community and the rosary procession, said he gave many Catholics the courage to witness for Christ.

“He was so consistent. He didn’t mince his words. That’s what I saw in him,” said Sheehan.