Geoghan was injured in an incident with another inmate about noon and died shortly after being taken to Leominster Hospital, said Department Of Correction spokeswoman Kelly Nantel. 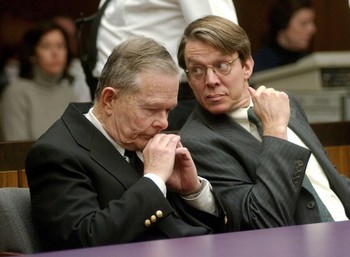 The incident happened just after lunchtime at Souza-Baranowski Correction Center, about 30 miles northwest of Boston, Nantel said. Geoghan was being held in protective custody to shield him from the general prison population, but he still had some contact with other inmates, Nantel said.

The other inmate was being held in isolation and the incident is under investigation, she said. She declined to give further details.

In civil lawsuits, more than 130 people have claimed Geoghan sexually abused them as children during his three decades as a priest at Boston-area parishes. He was convicted last year of indecent assault and battery for fondling a 10-year-old boy at a swimming pool.

Mitchell Garabedian, an attorney for many Geoghan victims, said he was “surprised and shocked” by Geoghan’s death.

“Many of my clients would have rather seen Father Geoghan serve out his time in jail and endure the rigors of further criminal trials, so that his pedophile acts could have been exposed further,” he said.

The church abuse scandal, which has had repercussions worldwide, broke in early 2002 with revelations that the Boston Archdiocese had shuttled Geoghan from parish to parish despite warnings about his behavior.

The scandal mushroomed after a judge ordered the release of archdiocese files involving dozens of priests, showing repeated examples of the archdiocese shipping priests to different parishes when allegations arose.

Soon dioceses and bishops across the country came under scrutiny for their handling of abuse allegations over the years, with the church tainted by scandal in many states. With the public outcry reaching a new crescendo, the bishops adopted a toughened policy against sex abuse and more than 325 priests of the roughly 46,000 American clergy were either dismissed or resigned from their duties in the year after the Geoghan case.

David Clohessy, national director of the Chicago-based Survivors Network of those Abused by Priests, said what made Geoghan’s case more “than just a single case about a single predator” was that it revealed the corruption in the church.

“In many respects, Geoghan is not the pivotal figure, it’s the people who he wounded and still came forward and the bishops who enabled him but were finally exposed,” he said.

Geoghan was ousted from the priesthood in 1998 at the urging of Cardinal Bernard Law. The Geoghan case was one of several that led to Law resigning in December over his mishandling of abuse cases.

A recent report by state Attorney General Thomas Reilly estimated that more than 1,000 children were abused by priests in the Boston archdiocese in the last 60 years. The Boston Archdiocese has offered $65 million to settle cases filed by more than 540 alleged victims.

Rev. Christopher Coyne, a spokesman for the Archdiocese of Boston, offered prayers for Geoghan’s family.

“Upon hearing the news of the tragic death of John Geoghan, the Archdiocese of Boston offers prayer for the repose of John’s soul, and extends its prayers in consolation to his beloved sister, Kathy, at this time of personal loss,” he said.

Geoghan was convicted in January 2002 for grabbing the buttocks of a 10-year-old boy in 1991 in the first of three criminal cases against him. He was sentenced to nine to 10 years in prison.

In September 2002, the archdiocese settled with 86 Geoghan victims for $10 million, after pulling out of an earlier settlement of about $30 million.

One of those victims, Ralph DelVecchio, said Geoghan deserved prison but didn’t deserve to be killed.

“I wouldn’t say he deserved to die, you know?” DelVecchio said. “He was in jail — that’s where I believed he should be.”