Anita Caspary led the largest single exodus of nuns from the Roman Catholic Church in American history. And while the issues seemed to be about dress codes and bedtimes, they ran much deeper. 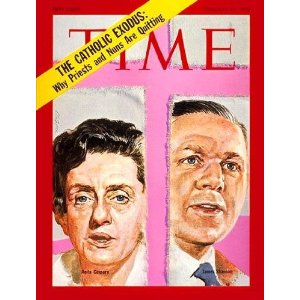 Dr. Caspary said she and the others had never wanted to renounce their vows. In a 2003 memoir, “Witness to Integrity,” she said they had been virtually forced into it by the intransigence of the archbishop, Cardinal James Francis McIntyre of Los Angeles, who would not let them teach in archdiocese schools unless they wore habits and adhered to a host of traditional regimens that were by her account matters best left to grown women to decide for themselves: when to pray, when to go to bed, what books to read or not read.

Rather than comply with those restrictions, Dr. Caspary and the other nuns broke away to establish the Immaculate Heart of Mary Community, a communal organization that continues to provide services in the poorest neighborhoods of Los Angeles. The organization confirmed her death, at age 95.

Dr. Caspary went by her religious name, Mother Humiliata, as superior general of her order. The appellation, meaning “humbled,” was tested sorely in her conflict with the archbishop.

Sandra M. Schneiders, a professor emeritus at the Jesuit School of Theology in Berkeley, Calif., who has written on what the news media came to call the Immaculate Heart “rebellion,” said in an interview Monday that the changes forbidden by Cardinal McIntyre were being widely adopted nationwide as a result of Vatican II reforms giving greater latitude to nuns.

“It’s not like the Immaculate Heart women were doing anything outlandish,” she said. “All these changes were taking place without incident in the majority of dioceses around the country. Cardinal McIntyre simply was saying, ‘Not in my diocese.’ ”

Cardinal McIntyre, a protégé of Cardinal Francis Spellman of New York, had been a vocal opponent of the reforms during the Vatican Council’s meetings. “He has been described by more than one Vatican observer as the most reactionary prelate in the church, bar none — not even those of the Curia,” an article in The New York Times said in 1964.

In her memoir, Dr. Caspary struggled for nunlike equanimity in writing about him. He was “stubborn, paternalistic, authoritative, frugal and puritanical,” she said. “But he was also a hard-working, dedicated churchman who left monuments in his archdiocese in brick and mortar.”

Anita Marie Caspary was born Nov. 4, 1915, in Herrick, S.D., the third of eight children of Jacob and Marie Caspary. The family moved to Los Angeles, where she received her bachelor’s degree in English at Immaculate Heart College in 1936. She entered the convent the same year, and taught high school English while studying toward a master’s degree at the University of Southern California. She received her Ph.D. in 1948.

She was president of Immaculate Heart College, which was operated by her order, from 1958 to 1963. (The school continued to operate after the schism in 1970, but closed in 1980.) After the break with the church, she taught at the Graduate Theological Union in Berkeley and served on the staff of the Peace and Justice Center of Southern California.

She wrote poetry throughout her life, and had completed a volume she hoped to publish shortly before she died. Her survivors include three sisters, all living in California: Gretchen DeStefano of Los Alamitos, Marion Roxstrom of Newport Beach and Ursula Caspary Frankel of Costa Mesa.

The Immaculate Heart Community remains a democratic communal group with an elected board of directors and 35-member “representative assembly.” Some of its members live in the convent, but most live outside. All contribute 20 percent of their wages to support what Dr. Caspary described in interviews as “a new way of people being together.”

The community has not grown. It counts 160 members today — not all of them former nuns.

In a 1972 interview with The Times, Dr. Caspary said she felt she was part of a cultural flourishing larger than a single enterprise.

“We’ve had an extraordinary experience for women,” she said. “We’ve worked through the problem of liberation. We worked our way out of an oppressive situation.”